Wall Street brokerages forecast that Genesco Inc. (NYSE:GCO – Get Rating) will post sales of $521.05 million for the current fiscal quarter, according to Zacks. Three analysts have issued estimates for Genesco’s earnings, with the lowest sales estimate coming in at $512.60 million and the highest estimate coming in at $537.00 million. Genesco posted sales of $538.70 million during the same quarter last year, which would indicate a negative year over year growth rate of 3.3%. The business is expected to announce its next earnings report on Monday, January 1st.

Genesco (NYSE:GCO – Get Rating) last posted its earnings results on Thursday, March 10th. The company reported $3.48 earnings per share (EPS) for the quarter, beating analysts’ consensus estimates of $2.65 by $0.83. Genesco had a return on equity of 18.74% and a net margin of 4.74%. The company had revenue of $727.66 million for the quarter, compared to analysts’ expectations of $726.57 million. During the same period last year, the business posted $2.76 earnings per share. The firm’s quarterly revenue was up 14.3% compared to the same quarter last year.

GCO has been the subject of several recent analyst reports. StockNews.com started coverage on Genesco in a report on Thursday, March 31st. They issued a “buy” rating for the company. Seaport Res Ptn restated a “buy” rating on shares of Genesco in a research note on Tuesday, January 18th. One research analyst has rated the stock with a hold rating, three have issued a buy rating and one has given a strong buy rating to the company. Based on data from MarketBeat.com, the company has an average rating of “Buy” and an average target price of $71.33.

About Genesco (Get Rating) 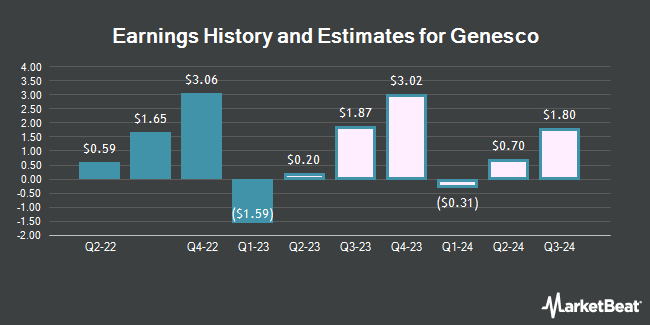