Wall Street brokerages expect Mercury Systems, Inc. (NASDAQ:MRCY – Get Rating) to post sales of $247.83 million for the current fiscal quarter, Zacks reports. Four analysts have provided estimates for Mercury Systems’ earnings, with the lowest sales estimate coming in at $246.03 million and the highest estimate coming in at $249.53 million. Mercury Systems reported sales of $256.86 million during the same quarter last year, which would suggest a negative year-over-year growth rate of 3.5%. The company is expected to announce its next quarterly earnings report after the market closes on Monday, January 1st.

On average, analysts expect that Mercury Systems will report full-year sales of $1.00 billion for the current financial year, with estimates ranging from $988.70 million to $1.01 billion. For the next financial year, analysts anticipate that the company will post sales of $1.09 billion, with estimates ranging from $1.05 billion to $1.11 billion. Zacks Investment Research’s sales calculations are a mean average based on a survey of analysts that cover Mercury Systems.

Mercury Systems (NASDAQ:MRCY – Get Rating) last released its quarterly earnings data on Tuesday, February 1st. The technology company reported $0.28 EPS for the quarter, missing the Thomson Reuters’ consensus estimate of $0.30 by ($0.02). The business had revenue of $220.40 million during the quarter, compared to the consensus estimate of $223.43 million. Mercury Systems had a return on equity of 6.47% and a net margin of 2.50%. The firm’s quarterly revenue was up 4.7% on a year-over-year basis. During the same period last year, the business posted $0.44 earnings per share.

About Mercury Systems (Get Rating)

Mercury Systems, Inc, a technology company, engages in the manufacture and sale of components, products, modules, and subsystems for aerospace and defense industries in the United States, Europe, and the Asia Pacific. The company's products and solutions are deployed in approximately 300 programs with 25 defense contractors and commercial aviation customers. 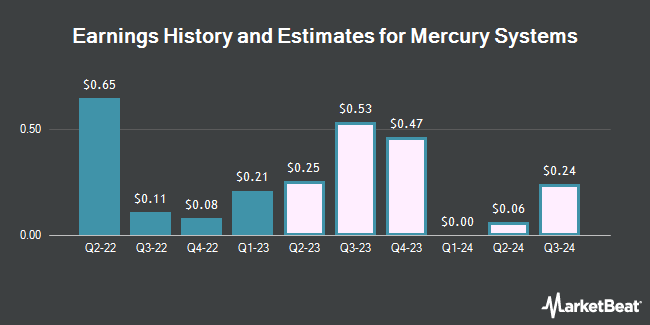