General Motors (NYSE:GM – Get Rating) (TSE:GMM.U) is scheduled to post its quarterly earnings results after the market closes on Tuesday, April 26th. Analysts expect General Motors to post earnings of $1.57 per share for the quarter. General Motors has set its FY22 guidance at $6.25-7.25 EPS.Individual that wish to register for the company’s earnings conference call can do so using this link.

General Motors (NYSE:GM – Get Rating) (TSE:GMM.U) last released its quarterly earnings results on Tuesday, February 1st. The auto manufacturer reported $1.35 earnings per share (EPS) for the quarter, topping the Zacks’ consensus estimate of $1.15 by $0.20. The firm had revenue of $33.58 billion for the quarter, compared to the consensus estimate of $34.24 billion. General Motors had a return on equity of 17.66% and a net margin of 7.89%. The company’s revenue for the quarter was down 10.5% on a year-over-year basis. During the same period last year, the business posted $1.93 EPS. On average, analysts expect General Motors to post $7 EPS for the current fiscal year and $7 EPS for the next fiscal year.

In related news, Director Patricia F. Russo acquired 6,000 shares of the stock in a transaction dated Thursday, February 10th. The stock was acquired at an average cost of $50.61 per share, with a total value of $303,660.00. The transaction was disclosed in a document filed with the SEC, which is available through this hyperlink. Also, EVP Julian G. Blissett sold 21,742 shares of the firm’s stock in a transaction that occurred on Wednesday, February 16th. The shares were sold at an average price of $50.04, for a total value of $1,087,969.68. The disclosure for this sale can be found here. Company insiders own 0.40% of the company’s stock. 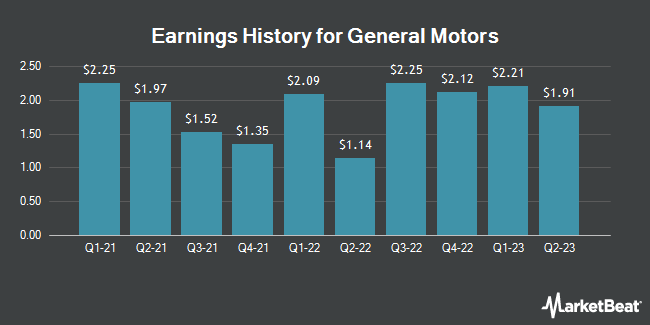