Franco-Nevada (NYSE:FNV – Get Rating) (TSE:FNV) had its price objective raised by equities researchers at KeyCorp from $150.00 to $180.00 in a note issued to investors on Tuesday, Benzinga reports. The firm currently has an “overweight” rating on the basic materials company’s stock. KeyCorp’s price target would indicate a potential upside of 7.93% from the stock’s current price.

Franco-Nevada (NYSE:FNV – Get Rating) (TSE:FNV) last posted its quarterly earnings data on Wednesday, March 9th. The basic materials company reported $0.86 EPS for the quarter, meeting the Zacks’ consensus estimate of $0.86. Franco-Nevada had a net margin of 56.44% and a return on equity of 11.57%. The company had revenue of $327.70 million during the quarter, compared to the consensus estimate of $317.51 million. During the same quarter in the prior year, the company posted $0.85 EPS. The company’s quarterly revenue was up 7.6% compared to the same quarter last year. Analysts anticipate that Franco-Nevada will post 3.45 EPS for the current fiscal year. 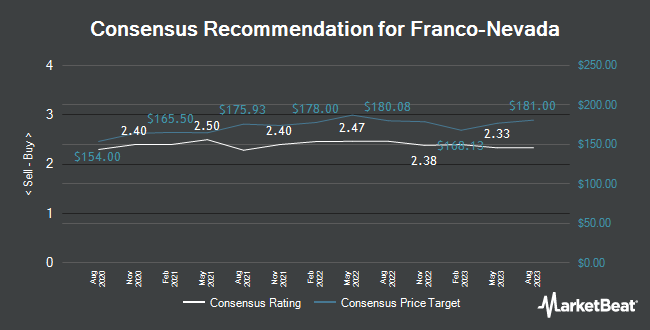