StoneCo Ltd. (NASDAQ:STNE – Get Rating) has earned an average recommendation of “Hold” from the eighteen analysts that are covering the company, MarketBeat reports. Three equities research analysts have rated the stock with a sell rating, eleven have assigned a hold rating and three have issued a buy rating on the company. The average 1-year price objective among brokerages that have updated their coverage on the stock in the last year is $25.75.

A number of equities analysts recently commented on the company. Citigroup raised StoneCo from a “neutral” rating to a “buy” rating and set a $15.00 price objective on the stock in a research note on Friday, March 18th. The Goldman Sachs Group downgraded shares of StoneCo from a “buy” rating to a “neutral” rating and dropped their price target for the stock from $73.00 to $19.00 in a research report on Wednesday, January 26th. Wells Fargo & Company assumed coverage on shares of StoneCo in a research report on Monday, April 4th. They set an “equal weight” rating and a $13.00 price objective for the company. Zacks Investment Research upgraded shares of StoneCo from a “sell” rating to a “hold” rating in a report on Tuesday, March 29th. Finally, Susquehanna Bancshares decreased their price target on StoneCo from $35.00 to $28.00 in a report on Wednesday, March 9th.

StoneCo (NASDAQ:STNE – Get Rating) last posted its quarterly earnings data on Thursday, March 17th. The company reported $0.13 earnings per share for the quarter, missing the Zacks’ consensus estimate of $0.17 by ($0.04). The company had revenue of $1.87 billion during the quarter, compared to analyst estimates of $1.71 billion. StoneCo had a negative net margin of 28.64% and a negative return on equity of 3.89%. The business’s revenue for the quarter was up 87.0% on a year-over-year basis. During the same quarter in the previous year, the company earned $0.19 earnings per share. As a group, sell-side analysts forecast that StoneCo will post 0.3 earnings per share for the current fiscal year.

About StoneCo (Get Rating)

StoneCo Ltd. provides financial technology solutions to merchants and integrated partners to conduct electronic commerce across in-store, online, and mobile channels in Brazil. It distributes its solutions, principally through proprietary Stone Hubs, which offer hyper-local sales and services; and technology and solutions to digital merchants through sales and technical personnel and software vendors, as well as sells solutions to brick-and-mortar and digital merchants through sales team. 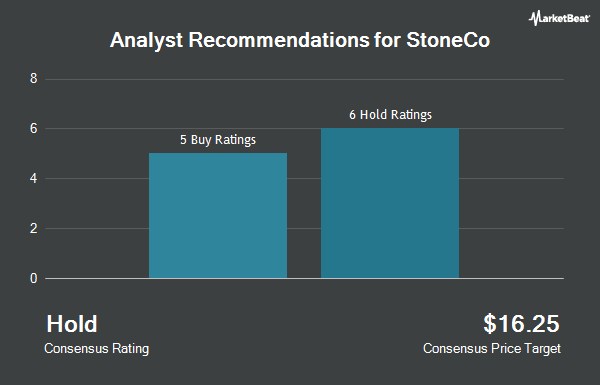 Receive News & Ratings for StoneCo Daily - Enter your email address below to receive a concise daily summary of the latest news and analysts' ratings for StoneCo and related companies with MarketBeat.com's FREE daily email newsletter.

Complete the form below to receive the latest headlines and analysts' recommendations for StoneCo with our free daily email newsletter: