TechnipFMC (NYSE:FTI – Get Rating) was upgraded by analysts at Societe Generale from a “hold” rating to a “buy” rating in a report released on Tuesday, The Fly reports.

FTI has been the subject of a number of other reports. StockNews.com assumed coverage on shares of TechnipFMC in a report on Thursday, March 31st. They set a “hold” rating for the company. Kepler Capital Markets upgraded shares of TechnipFMC from a “hold” rating to a “buy” rating and set a $10.00 target price for the company in a research note on Monday, February 28th. Two equities research analysts have rated the stock with a hold rating and six have issued a buy rating to the company. According to MarketBeat, TechnipFMC currently has a consensus rating of “Buy” and a consensus target price of $10.10.

TechnipFMC (NYSE:FTI – Get Rating) last released its quarterly earnings results on Wednesday, February 23rd. The oil and gas company reported ($0.12) earnings per share (EPS) for the quarter, missing the Zacks’ consensus estimate of ($0.01) by ($0.11). TechnipFMC had a net margin of 0.21% and a negative return on equity of 3.40%. The firm had revenue of $1.52 billion for the quarter, compared to the consensus estimate of $1.59 billion. During the same quarter last year, the company earned $0.05 earnings per share. The firm’s revenue was down 4.8% on a year-over-year basis. Equities research analysts forecast that TechnipFMC will post 0.17 EPS for the current year.

About TechnipFMC (Get Rating)

TechnipFMC plc engages in the oil and gas projects, technologies, and systems and services businesses in Europe, Central Asia, North and Latin America, the Asia Pacific, Africa, and the Middle East. The Subsea segment engages in the design, engineering, procurement, manufacturing, fabrication, installation, and life of field services for subsea systems, subsea field infrastructure, and subsea pipe systems used in oil and gas production and transportation. 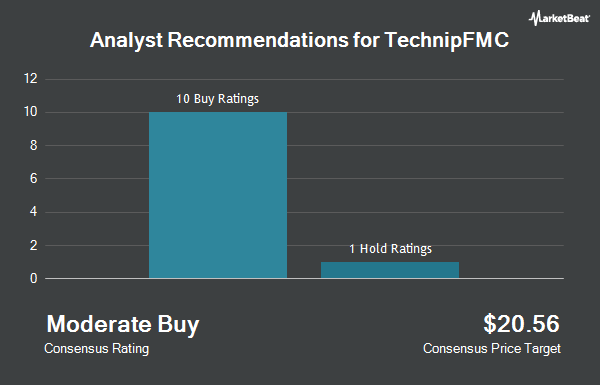 Complete the form below to receive the latest headlines and analysts' recommendations for TechnipFMC with our free daily email newsletter: