American Tower (NYSE:AMT – Get Rating) is set to announce its earnings results before the market opens on Wednesday, April 27th. Analysts expect the company to announce earnings of $2.41 per share for the quarter. Investors interested in participating in the company’s conference call can do so using this link.

American Tower (NYSE:AMT – Get Rating) last posted its quarterly earnings data on Wednesday, February 23rd. The real estate investment trust reported $0.99 earnings per share for the quarter, missing the Thomson Reuters’ consensus estimate of $1.15 by ($0.16). American Tower had a net margin of 27.44% and a return on equity of 34.57%. The company had revenue of $2.45 billion for the quarter, compared to analysts’ expectations of $2.41 billion. During the same quarter last year, the business posted $2.07 EPS. The business’s quarterly revenue was up 15.2% compared to the same quarter last year. On average, analysts expect American Tower to post $10 EPS for the current fiscal year and $11 EPS for the next fiscal year.

The company also recently announced a quarterly dividend, which will be paid on Friday, April 29th. Investors of record on Wednesday, April 13th will be given a $1.40 dividend. This is an increase from American Tower’s previous quarterly dividend of $1.39. The ex-dividend date of this dividend is Tuesday, April 12th. This represents a $5.60 dividend on an annualized basis and a yield of 2.16%. American Tower’s payout ratio is presently 98.77%.

In other American Tower news, Director Samme L. Thompson sold 1,590 shares of the firm’s stock in a transaction on Friday, February 4th. The stock was sold at an average price of $248.16, for a total transaction of $394,574.40. The sale was disclosed in a document filed with the Securities & Exchange Commission, which is accessible through this link. Insiders own 0.68% of the company’s stock.

About American Tower (Get Rating)

American Tower Corporation, one of the largest global REITs, is a leading independent owner, operator and developer of multitenant communications real estate with a portfolio of approximately 219,000 communications sites. For more information about American Tower, please visit the ÂEarnings MaterialsÂ and ÂInvestor PresentationsÂ sections of our investor relations website at www.americantower.com. 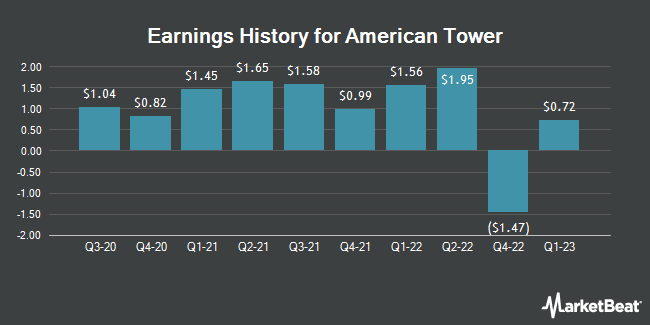 Complete the form below to receive the latest headlines and analysts' recommendations for American Tower with our free daily email newsletter: