Datto Holding Corp. (NYSE:MSP – Get Rating) insider Christopher Edward Mccloskey sold 24,630 shares of Datto stock in a transaction dated Monday, April 18th. The stock was sold at an average price of $34.69, for a total value of $854,414.70. The sale was disclosed in a document filed with the Securities & Exchange Commission, which is available at the SEC website.

Datto (NYSE:MSP – Get Rating) last released its earnings results on Wednesday, February 23rd. The investment management company reported $0.07 EPS for the quarter, missing the Thomson Reuters’ consensus estimate of $0.08 by ($0.01). The firm had revenue of $164.25 million during the quarter, compared to the consensus estimate of $162.16 million. Datto had a net margin of 8.31% and a return on equity of 4.05%. Sell-side analysts expect that Datto Holding Corp. will post 0.32 EPS for the current year.

About Datto (Get Rating)

Datto Holding Corp. provides cloud-based software and technology solutions for delivery through the managed service provider (MSP) channel to small and medium businesses in the United States and internationally. Its Unified Continuity products include Business Continuity and Disaster Recovery that protects servers and workstations, and minimize downtime; Cloud Continuity, an image-based continuity solution for laptops and desktops; SaaS Protection +, an automated and secure backup and restoration product; Workplace, a cloud-hosted file sync and share solution, which enable end-users to synchronize files across platforms, including mobile devices; and File Protection, an MSP-managed secure and scalable backup product that enables MSPs to protect and recover files and folders on workstations and laptops. 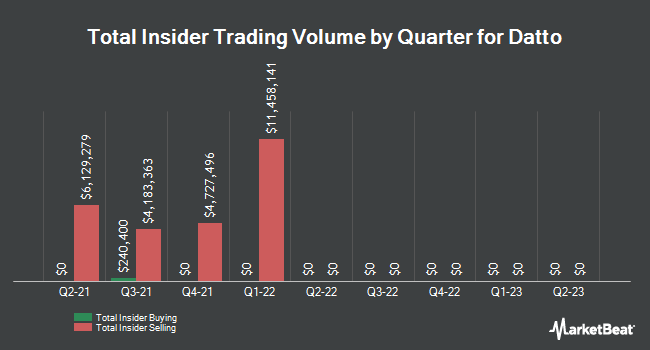 Receive News & Ratings for Datto Daily - Enter your email address below to receive a concise daily summary of the latest news and analysts' ratings for Datto and related companies with MarketBeat.com's FREE daily email newsletter.

$138.95 Million in Sales Expected for CyberArk Software Ltd. This Quarter

$48.49 Million in Sales Expected for CareTrust REIT, Inc. This Quarter

$181.84 Million in Sales Expected for Everi Holdings Inc. This Quarter

Complete the form below to receive the latest headlines and analysts' recommendations for Datto with our free daily email newsletter: