Empire State Realty Trust (NYSE:ESRT – Get Rating) will announce its earnings results after the market closes on Wednesday, April 27th. Analysts expect the company to announce earnings of $0.16 per share for the quarter. Investors interested in registering for the company’s conference call can do so using this link.

The company also recently disclosed a quarterly dividend, which was paid on Thursday, March 31st. Investors of record on Tuesday, March 15th were issued a $0.035 dividend. This represents a $0.14 annualized dividend and a yield of 1.56%. The ex-dividend date was Monday, March 14th. Empire State Realty Trust’s dividend payout ratio (DPR) is currently -200.00%. 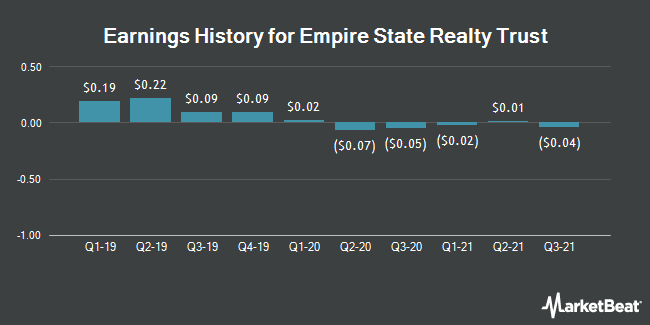 Complete the form below to receive the latest headlines and analysts' recommendations for Empire State Realty Trust with our free daily email newsletter: