Extreme Networks (NASDAQ:EXTR – Get Rating) is set to release its earnings data before the market opens on Wednesday, April 27th. Analysts expect Extreme Networks to post earnings of $0.11 per share for the quarter. Extreme Networks has set its Q3 guidance at $0.16-0.21 EPS.Persons that wish to register for the company’s earnings conference call can do so using this link.

Extreme Networks (NASDAQ:EXTR – Get Rating) last announced its quarterly earnings results on Thursday, January 27th. The technology company reported $0.15 earnings per share for the quarter, topping analysts’ consensus estimates of $0.11 by $0.04. Extreme Networks had a return on equity of 115.23% and a net margin of 3.69%. The company had revenue of $280.90 million during the quarter, compared to analysts’ expectations of $272.07 million. During the same quarter in the previous year, the firm earned $0.06 earnings per share. The business’s quarterly revenue was up 16.0% compared to the same quarter last year. On average, analysts expect Extreme Networks to post $1 EPS for the current fiscal year and $1 EPS for the next fiscal year. 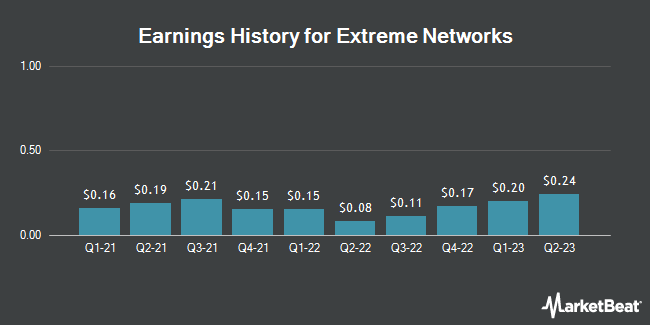 Complete the form below to receive the latest headlines and analysts' recommendations for Extreme Networks with our free daily email newsletter: