II-VI Incorporated (NASDAQ:IIVI – Get Rating) CTO Christopher Koeppen sold 500 shares of the company’s stock in a transaction dated Monday, April 18th. The stock was sold at an average price of $61.71, for a total transaction of $30,855.00. Following the sale, the chief technology officer now directly owns 29,329 shares in the company, valued at $1,809,892.59. The sale was disclosed in a filing with the Securities & Exchange Commission, which is available at this hyperlink.

II-VI (NASDAQ:IIVI – Get Rating) last released its earnings results on Wednesday, February 9th. The scientific and technical instruments company reported $0.79 earnings per share for the quarter, beating analysts’ consensus estimates of $0.74 by $0.05. The business had revenue of $806.82 million during the quarter, compared to the consensus estimate of $816.20 million. II-VI had a net margin of 9.57% and a return on equity of 13.66%. During the same quarter last year, the firm earned $0.89 earnings per share. As a group, sell-side analysts expect that II-VI Incorporated will post 3.07 EPS for the current year.

About II-VI (Get Rating) 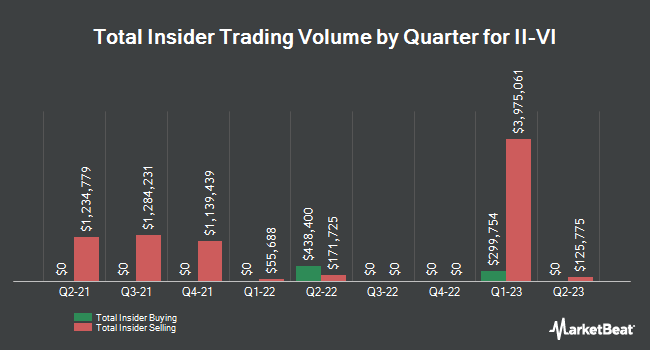