NeoGenomics (NASDAQ:NEO – Get Rating) is scheduled to be announcing its earnings results before the market opens on Wednesday, April 27th. Analysts expect the company to announce earnings of ($0.23) per share for the quarter. NeoGenomics has set its FY 2022 guidance at $-0.650-$-0.530 EPS.Investors interested in listening to the company’s conference call can do so using this link.

NeoGenomics (NASDAQ:NEO – Get Rating) last announced its quarterly earnings results on Wednesday, February 23rd. The medical research company reported ($0.14) EPS for the quarter, topping the Thomson Reuters’ consensus estimate of ($0.17) by $0.03. The company had revenue of $125.73 million during the quarter, compared to analyst estimates of $125.77 million. NeoGenomics had a negative return on equity of 4.17% and a negative net margin of 1.72%. The firm’s revenue was down .2% on a year-over-year basis. During the same period in the prior year, the firm posted $0.12 earnings per share. On average, analysts expect NeoGenomics to post $-1 EPS for the current fiscal year and $-1 EPS for the next fiscal year.

In other NeoGenomics news, CFO William Bonello sold 3,209 shares of NeoGenomics stock in a transaction that occurred on Monday, March 7th. The stock was sold at an average price of $18.29, for a total transaction of $58,692.61. The transaction was disclosed in a filing with the SEC, which is available through this link. 4.70% of the stock is owned by insiders. 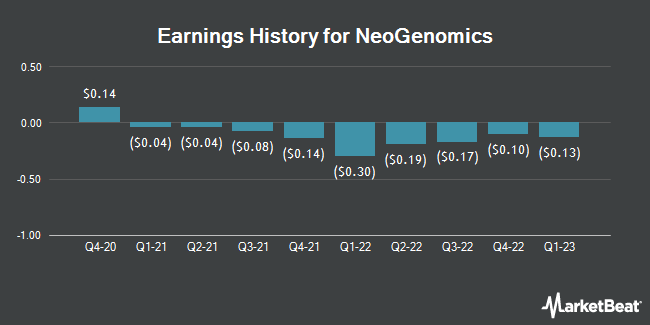 Complete the form below to receive the latest headlines and analysts' recommendations for NeoGenomics with our free daily email newsletter: