Orion Group (NYSE:ORN – Get Rating) is set to release its earnings data after the market closes on Wednesday, April 27th. Analysts expect Orion Group to post earnings of ($0.11) per share for the quarter.

Orion Group (NYSE:ORN – Get Rating) last announced its quarterly earnings data on Wednesday, March 2nd. The construction company reported ($0.17) earnings per share for the quarter, missing the Thomson Reuters’ consensus estimate of ($0.10) by ($0.07). The company had revenue of $162.27 million for the quarter, compared to analysts’ expectations of $137.69 million. Orion Group had a negative return on equity of 6.81% and a negative net margin of 2.42%. During the same quarter in the previous year, the company earned $0.12 earnings per share. On average, analysts expect Orion Group to post $0 EPS for the current fiscal year and $0 EPS for the next fiscal year.

Orion Group Holdings, Inc operates as a specialty construction company in the building, industrial, and infrastructure sectors in the continental United States, Alaska, Canada, and the Caribbean Basin. It operates in two segments, Marine and Concrete. The company provides various marine construction services, including construction, restoration, dredging, maintenance, and repair of marine transportation facilities and pipelines, bridges and causeways, and marine environmental structures. 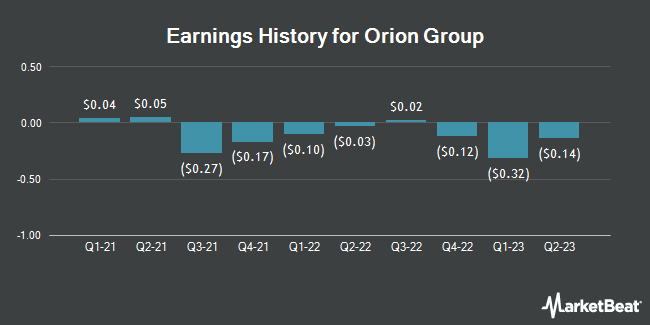 Complete the form below to receive the latest headlines and analysts' recommendations for Orion Group with our free daily email newsletter: