Revolution Medicines, Inc. (NASDAQ:RVMD – Get Rating) has earned a consensus rating of “Buy” from the six research firms that are presently covering the stock, MarketBeat reports. Two analysts have rated the stock with a hold recommendation and three have given a buy recommendation to the company. The average 1-year target price among analysts that have issued ratings on the stock in the last year is $33.00.

Revolution Medicines (NASDAQ:RVMD – Get Rating) last posted its quarterly earnings data on Monday, February 28th. The company reported ($0.71) EPS for the quarter, missing the consensus estimate of ($0.65) by ($0.06). The firm had revenue of $9.46 million for the quarter, compared to analysts’ expectations of $8.20 million. Revolution Medicines had a negative return on equity of 28.26% and a negative net margin of 636.58%. During the same period in the previous year, the firm earned ($0.52) earnings per share. As a group, research analysts anticipate that Revolution Medicines will post -3.62 EPS for the current fiscal year.

In other Revolution Medicines news, Director Thilo Schroeder bought 42,000 shares of the firm’s stock in a transaction dated Friday, March 25th. The stock was acquired at an average cost of $24.79 per share, for a total transaction of $1,041,180.00. The acquisition was disclosed in a document filed with the Securities & Exchange Commission, which is available at this hyperlink. Over the last quarter, insiders have bought 1,272,079 shares of company stock valued at $31,810,981. Corporate insiders own 22.60% of the company’s stock.

About Revolution Medicines (Get Rating)

Revolution Medicines, Inc, a clinical-stage precision oncology company, focuses on developing therapies to inhibit frontier targets in RAS-addicted cancers. The company is developing RMC-4630, an inhibitor of SHP2, which is in Phase 1/2 clinical trial for the treatment of solid tumors, such as gynecologic and colorectal cancer tumors. 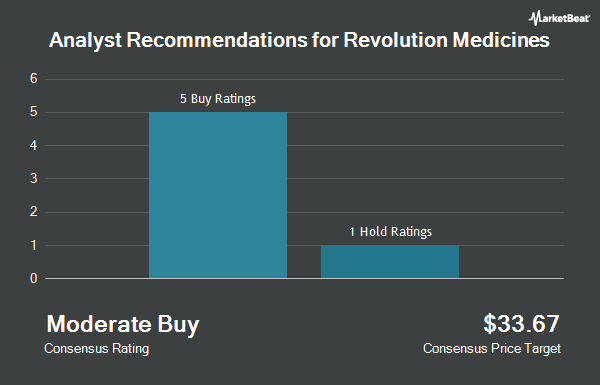 Complete the form below to receive the latest headlines and analysts' recommendations for Revolution Medicines with our free daily email newsletter: