Yamana Gold (TSE:YRI – Get Rating) (NYSE:AUY) had its target price upped by research analysts at Eight Capital from C$10.00 to C$10.75 in a research note issued to investors on Thursday, BayStreet.CA reports. Eight Capital’s price target points to a potential upside of 42.95% from the stock’s current price.

Yamana Gold (TSE:YRI – Get Rating) (NYSE:AUY) last announced its quarterly earnings data on Thursday, February 17th. The company reported C$0.14 earnings per share (EPS) for the quarter, topping the Thomson Reuters’ consensus estimate of C$0.11 by C$0.03. The firm had revenue of C$635.16 million during the quarter. On average, sell-side analysts predict that Yamana Gold will post 0.22 EPS for the current year.

About Yamana Gold (Get Rating)

Yamana Gold Inc, together with its subsidiaries, operates as a precious metal producer. It has gold and silver production, development stage properties, exploration properties, and land positions throughout the Americas, including Canada, Brazil, Chile, and Argentina producer. The company was formerly known as Yamana Resources Inc and changed its name to Yamana Gold Inc in August 2003. 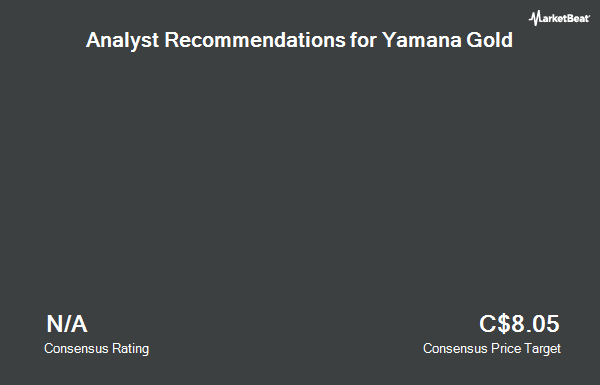 Complete the form below to receive the latest headlines and analysts' recommendations for Yamana Gold with our free daily email newsletter: