Embraer (NYSE:ERJ – Get Rating) is scheduled to be releasing its earnings data before the market opens on Thursday, April 28th. Analysts expect Embraer to post earnings of ($0.05) per share for the quarter. Embraer has set its FY 2022 guidance at EPS.

Embraer (NYSE:ERJ – Get Rating) last released its quarterly earnings data on Wednesday, March 9th. The aerospace company reported $0.32 EPS for the quarter, topping the Thomson Reuters’ consensus estimate of $0.09 by $0.23. Embraer had a negative return on equity of 1.03% and a negative net margin of 1.07%. During the same period last year, the firm posted ($0.07) EPS. On average, analysts expect Embraer to post $0 EPS for the current fiscal year and $1 EPS for the next fiscal year.

Several research firms have commented on ERJ. StockNews.com assumed coverage on Embraer in a research report on Thursday, March 31st. They issued a “hold” rating on the stock. Morgan Stanley raised Embraer from an “equal weight” rating to an “overweight” rating and upped their target price for the stock from $20.00 to $23.00 in a research note on Thursday, January 20th. Finally, Zacks Investment Research raised Embraer from a “hold” rating to a “buy” rating and set a $15.00 target price for the company in a research note on Wednesday, February 23rd. One analyst has rated the stock with a sell rating, two have given a hold rating and seven have assigned a buy rating to the stock. According to MarketBeat, the company has a consensus rating of “Buy” and an average price target of $19.89.

About Embraer (Get Rating)

Embraer SA designs, develops, manufactures, and sells aircrafts and systems in Brazil, North America, Latin America, the Asia Pacific, Brazil, Europe, and internationally. It operates through Defense and Security; Executive Jets; Service & Support; and Other segments. The Defense and Security segment engages in the research, development, production, modification, and support for military defense and security aircraft, as well as offers a range of products and integrated solutions that include radars, special space systems (satellites), and information and communications systems, such as command, control, communications, computer, intelligence, surveillance, and reconnaissance systems. 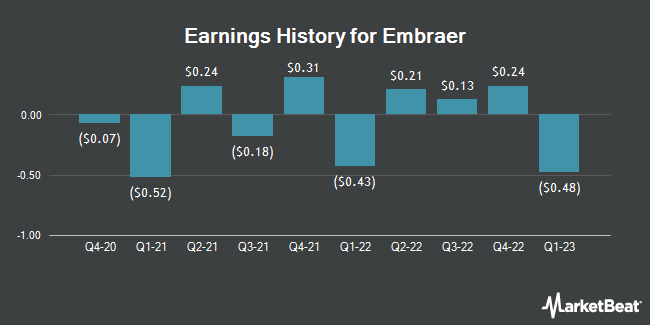 Receive News & Ratings for Embraer Daily - Enter your email address below to receive a concise daily summary of the latest news and analysts' ratings for Embraer and related companies with MarketBeat.com's FREE daily email newsletter.

Complete the form below to receive the latest headlines and analysts' recommendations for Embraer with our free daily email newsletter: