Major Drilling Group International Inc. (TSE:MDI – Get Rating) Director David Buchanan Tennant bought 2,000 shares of the business’s stock in a transaction that occurred on Thursday, April 21st. The shares were purchased at an average price of C$11.84 per share, for a total transaction of C$23,680.00. Following the completion of the purchase, the director now directly owns 197,100 shares of the company’s stock, valued at approximately C$2,333,664.

Major Drilling Group International (TSE:MDI – Get Rating) last posted its quarterly earnings data on Thursday, March 3rd. The company reported C$0.07 earnings per share for the quarter, beating the Thomson Reuters’ consensus estimate of C$0.04 by C$0.03. The firm had revenue of C$138.75 million during the quarter, compared to analyst estimates of C$122.80 million. As a group, analysts anticipate that Major Drilling Group International Inc. will post 0.68 earnings per share for the current fiscal year. 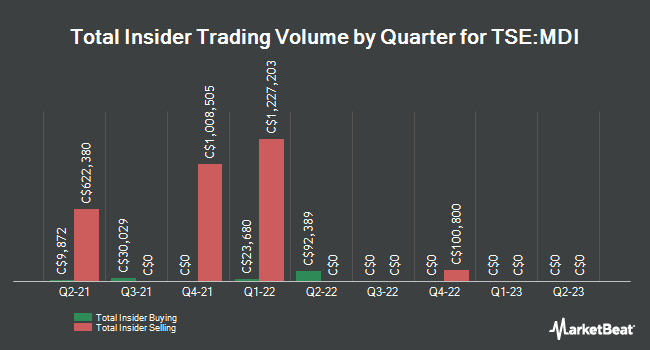 Complete the form below to receive the latest headlines and analysts' recommendations for Major Drilling Group International with our free daily email newsletter: