Kinder Morgan (NYSE:KMI – Get Rating) had its price target increased by stock analysts at Mizuho from $21.00 to $22.00 in a report released on Thursday, The Fly reports. Mizuho’s price objective would indicate a potential upside of 11.28% from the company’s current price.

Kinder Morgan (NYSE:KMI – Get Rating) last posted its quarterly earnings data on Wednesday, April 20th. The pipeline company reported $0.32 EPS for the quarter, beating the Zacks’ consensus estimate of $0.27 by $0.05. Kinder Morgan had a net margin of 10.74% and a return on equity of 9.49%. The firm had revenue of $4.29 billion for the quarter, compared to the consensus estimate of $3.66 billion. During the same period in the prior year, the firm posted $0.60 EPS. The firm’s revenue was down 17.6% compared to the same quarter last year. Equities research analysts predict that Kinder Morgan will post 1.07 EPS for the current year. 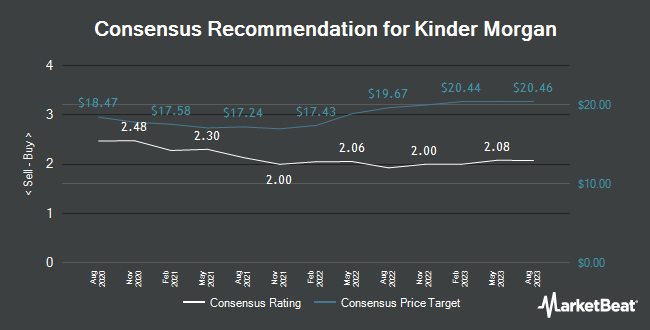