Corning Incorporated (NYSE:GLW – Get Rating) VP Robert P. France sold 2,190 shares of the stock in a transaction that occurred on Wednesday, April 20th. The stock was sold at an average price of $35.03, for a total transaction of $76,715.70. Following the completion of the sale, the vice president now directly owns 30,000 shares of the company’s stock, valued at $1,050,900. The transaction was disclosed in a filing with the SEC, which is available at this link.

Corning (NYSE:GLW – Get Rating) last issued its quarterly earnings results on Wednesday, January 26th. The electronics maker reported $0.54 earnings per share (EPS) for the quarter, topping analysts’ consensus estimates of $0.51 by $0.03. The company had revenue of $3.71 billion during the quarter, compared to the consensus estimate of $3.59 billion. Corning had a return on equity of 21.65% and a net margin of 13.53%. Corning’s revenue was up 11.6% on a year-over-year basis. During the same period last year, the company earned $0.52 earnings per share. As a group, equities analysts forecast that Corning Incorporated will post 2.32 EPS for the current year.

The business also recently declared a quarterly dividend, which was paid on Wednesday, March 30th. Investors of record on Monday, February 28th were given a $0.27 dividend. The ex-dividend date of this dividend was Friday, February 25th. This is an increase from Corning’s previous quarterly dividend of $0.24. This represents a $1.08 dividend on an annualized basis and a yield of 3.12%. Corning’s dividend payout ratio (DPR) is currently 87.10%.

About Corning (Get Rating) 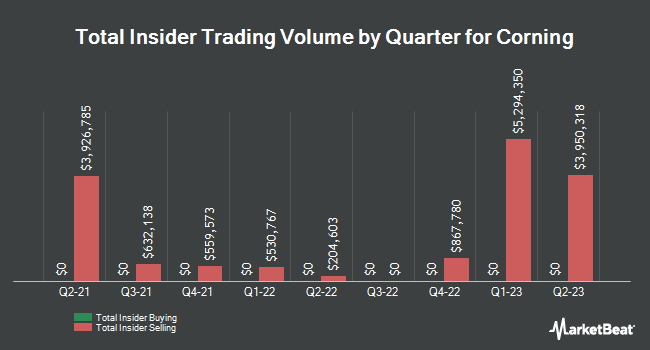