Sonic Automotive (NYSE:SAH – Get Rating) is scheduled to release its earnings data before the market opens on Thursday, April 28th. Analysts expect Sonic Automotive to post earnings of $2.45 per share for the quarter. Persons that wish to register for the company’s earnings conference call can do so using this link.

Sonic Automotive (NYSE:SAH – Get Rating) last issued its quarterly earnings results on Wednesday, February 16th. The company reported $2.66 earnings per share (EPS) for the quarter, beating the Zacks’ consensus estimate of $1.83 by $0.83. The firm had revenue of $3.18 billion during the quarter, compared to the consensus estimate of $3.11 billion. Sonic Automotive had a return on equity of 37.99% and a net margin of 2.81%. The company’s revenue for the quarter was up 13.8% on a year-over-year basis. During the same quarter last year, the company posted $1.50 EPS. On average, analysts expect Sonic Automotive to post $10 EPS for the current fiscal year and $9 EPS for the next fiscal year.

The firm also recently declared a quarterly dividend, which was paid on Thursday, April 14th. Stockholders of record on Tuesday, March 15th were given a dividend of $0.25 per share. This represents a $1.00 dividend on an annualized basis and a dividend yield of 2.24%. The ex-dividend date of this dividend was Monday, March 14th. This is an increase from Sonic Automotive’s previous quarterly dividend of $0.12. Sonic Automotive’s dividend payout ratio (DPR) is 12.38%.

In other Sonic Automotive news, President Jeff Dyke sold 6,395 shares of Sonic Automotive stock in a transaction that occurred on Friday, March 4th. The stock was sold at an average price of $52.37, for a total value of $334,906.15. The sale was disclosed in a legal filing with the SEC, which can be accessed through the SEC website. Also, major shareholder Paul P. Rusnak purchased 127,475 shares of the firm’s stock in a transaction on Wednesday, April 6th. The stock was bought at an average cost of $41.89 per share, for a total transaction of $5,339,927.75. Following the completion of the purchase, the insider now directly owns 5,000,000 shares in the company, valued at $209,450,000. The disclosure for this purchase can be found here. 36.07% of the stock is owned by insiders.

About Sonic Automotive (Get Rating)

Sonic Automotive, Inc operates as an automotive retailer in the United States. It operates in two segments, Franchised Dealerships and EchoPark. The Franchised Dealerships segment is involved in the sale of new and used cars and light trucks, and replacement parts; provision of vehicle maintenance, manufacturer warranty repair, and paint and collision repair services; and arrangement of extended warranties, service contracts, financing, insurance, and other aftermarket products for its guests. 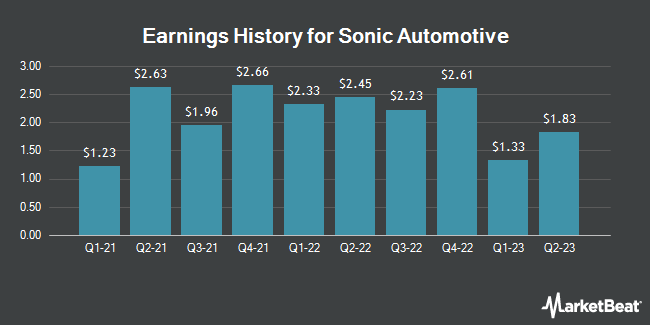 F5, Inc. Given Consensus Recommendation of “Buy” by Analysts

Complete the form below to receive the latest headlines and analysts' recommendations for Sonic Automotive with our free daily email newsletter: