BJ’s Restaurants (NASDAQ:BJRI – Get Rating) had its price target hoisted by investment analysts at Wedbush from $33.00 to $35.00 in a research report issued to clients and investors on Friday, Benzinga reports. The firm currently has a “neutral” rating on the restaurant operator’s stock. Wedbush’s target price would suggest a potential upside of 19.58% from the stock’s current price.

BJRI has been the topic of several other research reports. StockNews.com began coverage on shares of BJ’s Restaurants in a research note on Thursday, March 31st. They issued a “hold” rating on the stock. Zacks Investment Research raised BJ’s Restaurants from a “sell” rating to a “hold” rating and set a $29.00 price target on the stock in a research report on Tuesday, March 22nd. Citigroup began coverage on BJ’s Restaurants in a report on Tuesday, April 12th. They issued a “neutral” rating and a $29.00 price objective for the company. Deutsche Bank Aktiengesellschaft dropped their target price on shares of BJ’s Restaurants from $42.00 to $40.00 in a report on Friday. Finally, Barclays reduced their price target on shares of BJ’s Restaurants from $31.00 to $25.00 and set an “underweight” rating for the company in a report on Friday, February 18th. One analyst has rated the stock with a sell rating, seven have issued a hold rating and six have assigned a buy rating to the stock. According to data from MarketBeat, the company presently has a consensus rating of “Hold” and a consensus price target of $41.38.

BJ’s Restaurants (NASDAQ:BJRI – Get Rating) last posted its quarterly earnings data on Thursday, April 21st. The restaurant operator reported $0.07 earnings per share for the quarter, topping the Zacks’ consensus estimate of ($0.26) by $0.33. The company had revenue of $298.70 million for the quarter, compared to analyst estimates of $297.22 million. BJ’s Restaurants had a negative net margin of 0.33% and a negative return on equity of 1.31%. The firm’s revenue for the quarter was up 33.8% on a year-over-year basis. During the same period in the prior year, the company posted ($0.14) EPS. As a group, sell-side analysts predict that BJ’s Restaurants will post 0.34 earnings per share for the current fiscal year.

About BJ’s Restaurants (Get Rating) 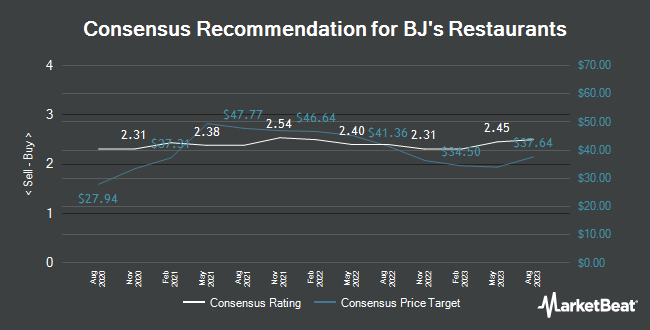