Clearfield (NASDAQ:CLFD – Get Rating) will be releasing its earnings data after the market closes on Thursday, April 28th. Analysts expect Clearfield to post earnings of $0.57 per share for the quarter.

Clearfield (NASDAQ:CLFD – Get Rating) last announced its earnings results on Thursday, January 27th. The communications equipment provider reported $0.75 earnings per share for the quarter, topping analysts’ consensus estimates of $0.49 by $0.26. Clearfield had a return on equity of 27.24% and a net margin of 16.72%. The firm had revenue of $51.11 million for the quarter, compared to the consensus estimate of $42.00 million. During the same quarter in the previous year, the business earned $0.23 EPS.

In other news, Chairman Ronald G. Roth purchased 2,000 shares of the firm’s stock in a transaction dated Wednesday, February 9th. The shares were purchased at an average price of $61.84 per share, with a total value of $123,680.00. The acquisition was disclosed in a filing with the Securities & Exchange Commission, which is accessible through the SEC website. Insiders own 17.40% of the company’s stock.

CLFD has been the topic of a number of research reports. StockNews.com initiated coverage on shares of Clearfield in a report on Thursday, March 31st. They issued a “hold” rating on the stock. Zacks Investment Research cut shares of Clearfield from a “strong-buy” rating to a “hold” rating in a report on Wednesday, March 30th. Finally, BWS Financial assumed coverage on shares of Clearfield in a report on Wednesday, January 19th. They issued a “sell” rating and a $37.00 price target on the stock. One analyst has rated the stock with a sell rating, two have assigned a hold rating and three have assigned a buy rating to the stock. According to MarketBeat.com, the stock has a consensus rating of “Hold” and a consensus target price of $49.80.

About Clearfield (Get Rating)

Clearfield, Inc manufactures, markets, and sells standard and custom passive connectivity products to the fiber-to-the-premises, enterprises, and original equipment manufacturers markets in the United States and internationally. The company offers FieldSmart, a series of panels, cabinets, wall boxes, and other enclosures. 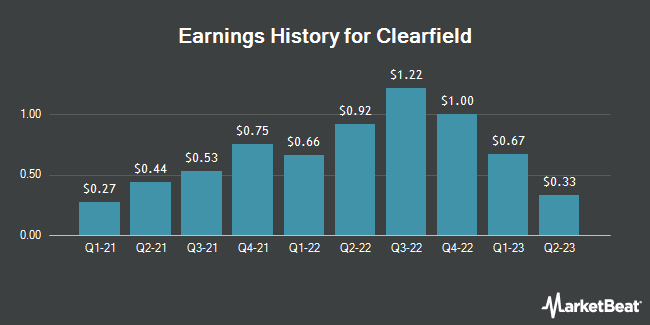 Complete the form below to receive the latest headlines and analysts' recommendations for Clearfield with our free daily email newsletter: