Daqo New Energy (NYSE:DQ – Get Rating) released its quarterly earnings results on Thursday. The semiconductor company reported $6.99 earnings per share (EPS) for the quarter, beating analysts’ consensus estimates of $6.81 by $0.18, MarketWatch Earnings reports. Daqo New Energy had a return on equity of 48.35% and a net margin of 45.04%. During the same quarter in the prior year, the company posted $1.08 earnings per share.

Daqo New Energy Corp., together with its subsidiaries, manufactures and sells polysilicon to photovoltaic product manufactures in the People's Republic of China. Its products are used in ingots, wafers, cells, and modules for solar power solutions. The company was formerly known as Mega Stand International Limited and changed its name to Daqo New Energy Corp. 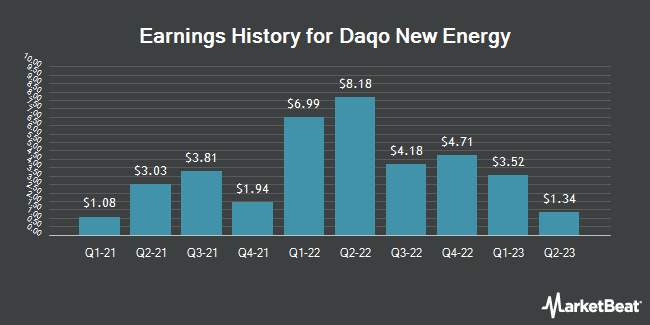 Complete the form below to receive the latest headlines and analysts' recommendations for Daqo New Energy with our free daily email newsletter: