Exxon Mobil (NYSE:XOM – Get Rating) is scheduled to post its quarterly earnings results before the market opens on Friday, April 29th. Analysts expect Exxon Mobil to post earnings of $2.00 per share for the quarter. Parties interested in registering for the company’s conference call can do so using this link.

Exxon Mobil (NYSE:XOM – Get Rating) last posted its quarterly earnings data on Tuesday, February 1st. The oil and gas company reported $2.05 EPS for the quarter, topping analysts’ consensus estimates of $1.96 by $0.09. Exxon Mobil had a return on equity of 13.67% and a net margin of 8.07%. The firm had revenue of $84.97 billion during the quarter, compared to analysts’ expectations of $84.58 billion. During the same quarter last year, the business posted $0.03 EPS. The firm’s quarterly revenue was up 82.6% compared to the same quarter last year. On average, analysts expect Exxon Mobil to post $9 EPS for the current fiscal year and $8 EPS for the next fiscal year.

Exxon Mobil announced that its Board of Directors has approved a stock repurchase plan on Tuesday, February 1st that authorizes the company to buyback $10.00 billion in outstanding shares. This buyback authorization authorizes the oil and gas company to purchase up to 2.9% of its stock through open market purchases. Stock buyback plans are generally an indication that the company’s board believes its stock is undervalued.

The company also recently disclosed a quarterly dividend, which was paid on Thursday, March 10th. Stockholders of record on Thursday, February 10th were paid a $0.88 dividend. This represents a $3.52 annualized dividend and a dividend yield of 4.04%. The ex-dividend date was Wednesday, February 9th. Exxon Mobil’s dividend payout ratio is currently 65.31%. 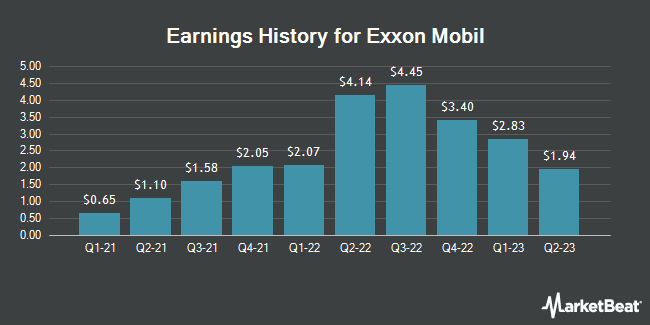