Magnite, Inc. (NASDAQ:MGNI) Given Consensus Recommendation of “Buy” by Brokerages

Magnite, Inc. (NASDAQ:MGNI – Get Rating) has earned an average recommendation of “Buy” from the nine brokerages that are presently covering the firm, Marketbeat reports. One investment analyst has rated the stock with a sell rating and seven have assigned a buy rating to the company. The average 1 year price objective among brokerages that have issued a report on the stock in the last year is $27.38.

Magnite (NASDAQ:MGNI – Get Rating) last issued its quarterly earnings data on Wednesday, February 23rd. The company reported $0.20 EPS for the quarter, missing analysts’ consensus estimates of $0.25 by ($0.05). The company had revenue of $161.30 million for the quarter, compared to analyst estimates of $139.85 million. Magnite had a return on equity of 5.85% and a net margin of 0.01%. The company’s revenue was up 96.7% on a year-over-year basis. During the same quarter in the previous year, the business earned $0.14 earnings per share. On average, analysts predict that Magnite will post 0.5 EPS for the current year.

About Magnite (Get Rating)

Magnite, Inc operates an independent sell-side advertising platform in the United States and internationally. The company's platform offers applications and services for sellers of digital advertising inventory or publishers that own and operate CTV channels, applications, websites, and other digital media properties, to manage and monetize their inventory; and provides applications and services for buyers, including advertisers, agencies, agency trading desks, and demand side platforms to buy digital advertising inventory. 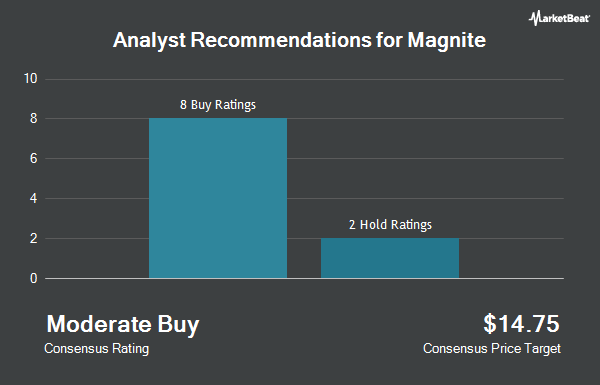 Receive News & Ratings for Magnite Daily - Enter your email address below to receive a concise daily summary of the latest news and analysts' ratings for Magnite and related companies with MarketBeat.com's FREE daily email newsletter.

Investment Analysts’ Downgrades for May 20th

Rapid7, Inc. Given Average Rating of “Buy” by Brokerages

Complete the form below to receive the latest headlines and analysts' recommendations for Magnite with our free daily email newsletter: