Teck Resources Limited (NYSE:TECK – Get Rating) (TSE:TECK) – Analysts at Raymond James increased their FY2023 earnings per share estimates for Teck Resources in a research report issued on Tuesday, April 19th. Raymond James analyst B. Macarthur now forecasts that the basic materials company will post earnings per share of $4.87 for the year, up from their prior forecast of $4.31.

Teck Resources (NYSE:TECK – Get Rating) (TSE:TECK) last issued its quarterly earnings data on Thursday, February 24th. The basic materials company reported $2.02 EPS for the quarter, missing the consensus estimate of $2.04 by ($0.02). Teck Resources had a return on equity of 13.80% and a net margin of 21.23%. The company had revenue of $4.41 billion during the quarter, compared to analyst estimates of $4.54 billion. During the same quarter in the prior year, the company posted $0.35 earnings per share. The business’s revenue was up 72.1% compared to the same quarter last year.

The company also recently disclosed a quarterly dividend, which was paid on Thursday, March 31st. Investors of record on Tuesday, March 15th were issued a $0.0981 dividend. This represents a $0.39 dividend on an annualized basis and a dividend yield of 0.98%. The ex-dividend date was Monday, March 14th. This is a boost from Teck Resources’s previous quarterly dividend of $0.04. Teck Resources’s dividend payout ratio (DPR) is 9.26%. 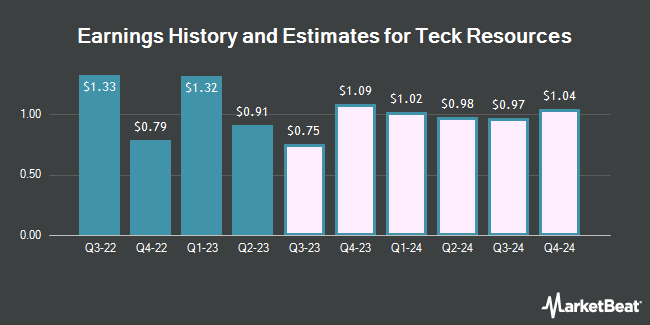