Sprout Social, Inc. (NASDAQ:SPT – Get Rating) has been assigned an average recommendation of “Buy” from the thirteen ratings firms that are covering the stock, Marketbeat reports. Two research analysts have rated the stock with a hold recommendation and nine have assigned a buy recommendation to the company. The average 1 year price target among brokerages that have issued ratings on the stock in the last year is $106.91.

Sprout Social (NASDAQ:SPT – Get Rating) last issued its quarterly earnings data on Tuesday, February 22nd. The company reported ($0.18) EPS for the quarter, missing the consensus estimate of ($0.17) by ($0.01). The firm had revenue of $53.27 million during the quarter, compared to analysts’ expectations of $51.28 million. During the same period in the previous year, the company posted ($0.11) EPS. The company’s revenue was up 42.6% on a year-over-year basis. As a group, research analysts predict that Sprout Social will post -0.69 EPS for the current year.

Sprout Social, Inc designs, develops, and operates a web-based social media management platform in the Americas, Europe, the Middle East, Africa, and the Asia Pacific. It provides cloud software that brings together social messaging, data, and workflows in a unified system of record, intelligence, and action. 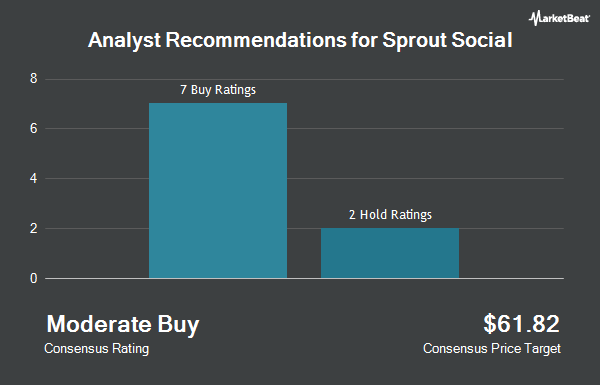 Complete the form below to receive the latest headlines and analysts' recommendations for Sprout Social with our free daily email newsletter: