According to Zacks, analysts expect that Cogent Communications will report full year sales of $605.80 million for the current year, with estimates ranging from $589.79 million to $618.90 million. For the next year, analysts forecast that the company will post sales of $628.38 million, with estimates ranging from $600.34 million to $654.70 million. Zacks’ sales averages are a mean average based on a survey of analysts that that provide coverage for Cogent Communications.

Cogent Communications (NASDAQ:CCOI – Get Rating) last announced its quarterly earnings data on Thursday, February 24th. The technology company reported $0.24 EPS for the quarter, topping the Zacks’ consensus estimate of $0.20 by $0.04. The firm had revenue of $147.20 million during the quarter, compared to analyst estimates of $149.14 million. Cogent Communications had a negative return on equity of 12.02% and a net margin of 8.17%. The business’s quarterly revenue was up 2.3% compared to the same quarter last year. During the same period last year, the company posted $0.19 EPS.

The company also recently disclosed a quarterly dividend, which was paid on Friday, March 25th. Stockholders of record on Wednesday, March 9th were given a dividend of $0.855 per share. The ex-dividend date was Tuesday, March 8th. This is a boost from Cogent Communications’s previous quarterly dividend of $0.83. This represents a $3.42 dividend on an annualized basis and a dividend yield of 5.32%. Cogent Communications’s payout ratio is currently 332.04%. 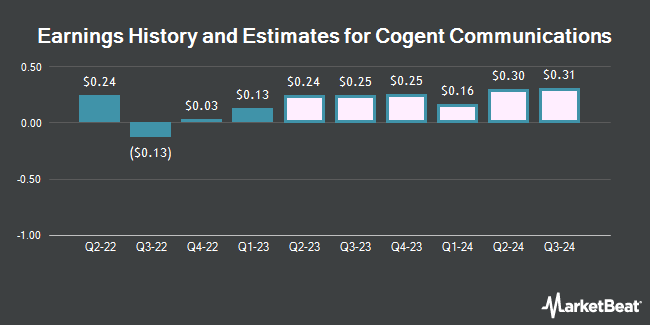 Complete the form below to receive the latest headlines and analysts' recommendations for Cogent Communications with our free daily email newsletter: