Research analysts at Morgan Stanley initiated coverage on shares of DoorDash (NYSE:DASH – Get Rating) in a research note issued to investors on Monday, The Fly reports. The firm set an “equal weight” rating and a $100.00 price target on the stock. Morgan Stanley’s price objective points to a potential upside of 12.36% from the company’s previous close.

DoorDash (NYSE:DASH – Get Rating) last released its earnings results on Wednesday, February 16th. The company reported ($0.45) earnings per share (EPS) for the quarter, missing the consensus estimate of ($0.28) by ($0.17). The firm had revenue of $1.30 billion during the quarter, compared to the consensus estimate of $1.28 billion. The firm’s quarterly revenue was up 34.0% compared to the same quarter last year. During the same period in the previous year, the company posted ($2.67) earnings per share. On average, equities research analysts anticipate that DoorDash will post -1.23 earnings per share for the current year.

In related news, Director Alfred Lin bought 183,224 shares of the firm’s stock in a transaction on Wednesday, March 9th. The stock was acquired at an average cost of $92.38 per share, for a total transaction of $16,926,233.12. The acquisition was disclosed in a legal filing with the SEC, which is available at this hyperlink. Also, Director Stanley Tang sold 80,000 shares of the business’s stock in a transaction on Tuesday, March 29th. The shares were sold at an average price of $120.17, for a total transaction of $9,613,600.00. The disclosure for this sale can be found here. Insiders have sold 449,099 shares of company stock valued at $46,872,703 over the last quarter. Company insiders own 15.54% of the company’s stock.

About DoorDash (Get Rating)

DoorDash, Inc operates a logistics platform that connects merchants, consumers, and dashers in the United States and internationally. It operates DoorDash marketplace, which provides an array of services that enable merchants to solve mission-critical challenges, such as customer acquisition, delivery, insights and analytics, merchandising, payment processing, and customer support; and offers DoorDash Drive, a white-label logistics service; DoorDash Storefront that enables merchants to offer consumers on-demand access to e-commerce. 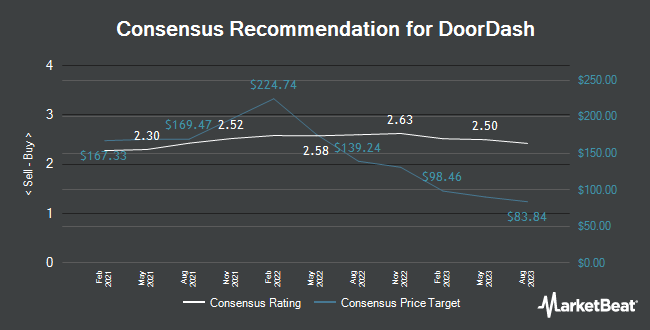 Receive News & Ratings for DoorDash Daily - Enter your email address below to receive a concise daily summary of the latest news and analysts' ratings for DoorDash and related companies with MarketBeat.com's FREE daily email newsletter.

$1.41 Billion in Sales Expected for Fortive Co. This Quarter

$1.37 Million in Sales Expected for Aeva Technologies, Inc. This Quarter

Complete the form below to receive the latest headlines and analysts' recommendations for DoorDash with our free daily email newsletter: