Chesapeake Energy (NASDAQ:CHK – Get Rating) last posted its quarterly earnings data on Wednesday, February 23rd. The company reported $2.39 earnings per share for the quarter, missing the consensus estimate of $2.40 by ($0.01). The company had revenue of $3.09 billion during the quarter, compared to analyst estimates of $1.08 billion. Chesapeake Energy had a return on equity of 160.87% and a net margin of 108.93%. During the same period in the previous year, the company earned ($42.54) EPS.

In other Chesapeake Energy news, major shareholder Holdings L.P. Blackstone III sold 186,085 shares of the firm’s stock in a transaction that occurred on Monday, April 18th. The stock was sold at an average price of $96.25, for a total value of $17,910,681.25. Following the completion of the sale, the insider now owns 4,156,830 shares in the company, valued at approximately $400,094,887.50. The sale was disclosed in a filing with the Securities & Exchange Commission, which is available through this hyperlink. Company insiders own 1.10% of the company’s stock.

About Chesapeake Energy (Get Rating)

Chesapeake Energy Corporation, an independent exploration and production company, engages in the acquisition, exploration, and development of properties for the production of oil, natural gas, and natural gas liquids from underground reservoirs in the United States. The company holds interests in natural gas resource plays in the Marcellus Shale in the northern Appalachian Basin in Pennsylvania and the Haynesville/Bossier Shales in northwestern Louisiana; and the liquids-rich resource play in the Eagle Ford Shale in South Texas. 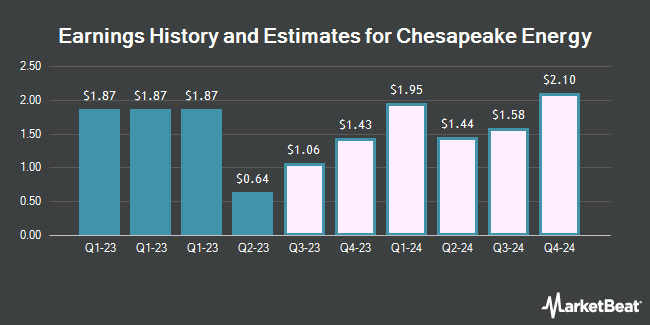 Complete the form below to receive the latest headlines and analysts' recommendations for Chesapeake Energy with our free daily email newsletter: