The Mosaic Company (NYSE:MOS) Given Consensus Rating of “Hold” by Analysts

Shares of The Mosaic Company (NYSE:MOS – Get Rating) have been given a consensus rating of “Hold” by the nineteen analysts that are presently covering the company, Marketbeat Ratings reports. One equities research analyst has rated the stock with a sell rating, nine have assigned a hold rating and eight have given a buy rating to the company. The average 1-year price objective among brokers that have updated their coverage on the stock in the last year is $59.94.

Mosaic (NYSE:MOS – Get Rating) last released its earnings results on Tuesday, February 22nd. The basic materials company reported $1.95 EPS for the quarter, hitting the Thomson Reuters’ consensus estimate of $1.95. Mosaic had a net margin of 13.19% and a return on equity of 18.45%. The company had revenue of $3.84 billion during the quarter, compared to analysts’ expectations of $3.93 billion. During the same quarter last year, the business earned $0.57 EPS. The business’s revenue was up 56.3% on a year-over-year basis. On average, equities analysts expect that Mosaic will post 12.27 EPS for the current year.

Mosaic announced that its Board of Directors has approved a stock buyback plan on Tuesday, February 22nd that permits the company to repurchase $1.00 billion in shares. This repurchase authorization permits the basic materials company to reacquire up to 6% of its stock through open market purchases. Stock repurchase plans are often an indication that the company’s board believes its shares are undervalued. 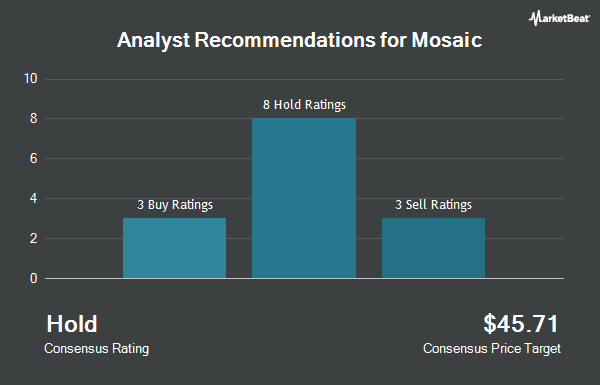