Alliant Energy (NASDAQ:LNT – Get Rating) last announced its earnings results on Thursday, February 17th. The company reported $0.35 EPS for the quarter, hitting the consensus estimate of $0.35. Alliant Energy had a net margin of 18.37% and a return on equity of 11.44%. The firm had revenue of $927.00 million for the quarter. During the same quarter last year, the business earned $0.24 EPS. As a group, analysts forecast that Alliant Energy will post 2.74 EPS for the current fiscal year.

Several research firms have issued reports on LNT. Wells Fargo & Company reduced their price objective on Alliant Energy from $61.00 to $60.00 and set an “equal weight” rating on the stock in a report on Tuesday, February 22nd. Bank of America cut Alliant Energy from a “neutral” rating to an “underperform” rating and raised their price target for the company from $57.00 to $60.00 in a report on Wednesday, January 19th. One research analyst has rated the stock with a sell rating, five have assigned a hold rating and two have given a buy rating to the stock. According to data from MarketBeat, Alliant Energy currently has an average rating of “Hold” and a consensus price target of $61.50. 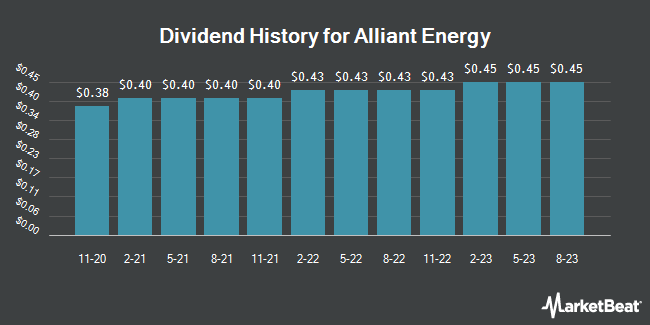