ArcBest Co. (NASDAQ:ARCB) Given Average Rating of “Buy” by Analysts

ArcBest Co. (NASDAQ:ARCB – Get Rating) has been given an average rating of “Buy” by the eleven analysts that are currently covering the company, MarketBeat.com reports. Three research analysts have rated the stock with a hold rating and six have given a buy rating to the company. The average 1 year price target among brokerages that have issued a report on the stock in the last year is $107.13.

In other ArcBest news, Director Steven Spinner sold 5,000 shares of ArcBest stock in a transaction that occurred on Wednesday, February 9th. The shares were sold at an average price of $91.00, for a total transaction of $455,000.00. The transaction was disclosed in a filing with the SEC, which can be accessed through the SEC website. Also, Director Michael P. Hogan purchased 1,771 shares of the firm’s stock in a transaction on Monday, February 7th. The shares were acquired at an average cost of $84.77 per share, for a total transaction of $150,127.67. The disclosure for this purchase can be found here. Company insiders own 1.68% of the company’s stock.

ArcBest (NASDAQ:ARCB – Get Rating) last posted its earnings results on Tuesday, February 1st. The transportation company reported $2.79 earnings per share for the quarter, topping the consensus estimate of $2.27 by $0.52. The firm had revenue of $1.19 billion during the quarter, compared to the consensus estimate of $1.13 billion. ArcBest had a net margin of 5.36% and a return on equity of 24.57%. The company’s revenue was up 45.2% on a year-over-year basis. During the same quarter last year, the company earned $0.97 earnings per share. On average, sell-side analysts expect that ArcBest will post 10.66 earnings per share for the current fiscal year.

About ArcBest (Get Rating) 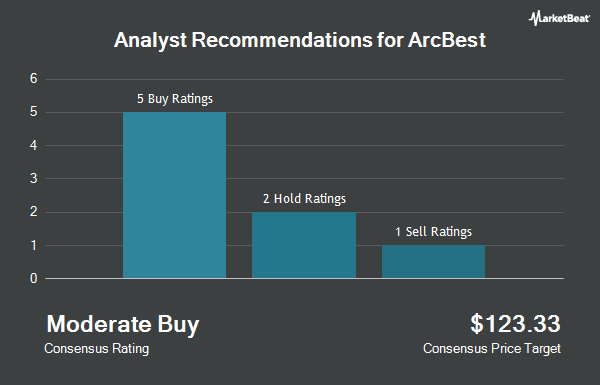 Receive News & Ratings for ArcBest Daily - Enter your email address below to receive a concise daily summary of the latest news and analysts' ratings for ArcBest and related companies with MarketBeat.com's FREE daily email newsletter.

Complete the form below to receive the latest headlines and analysts' recommendations for ArcBest with our free daily email newsletter: