Bandwidth (NASDAQ:BAND – Get Rating) had its price objective dropped by Barclays from $80.00 to $45.00 in a research note issued on Tuesday, The Fly reports. Barclays‘s price target suggests a potential upside of 67.47% from the company’s current price.

Bandwidth (NASDAQ:BAND – Get Rating) last announced its quarterly earnings data on Tuesday, February 22nd. The company reported $0.09 EPS for the quarter, topping the Zacks’ consensus estimate of ($0.13) by $0.22. The company had revenue of $126.00 million during the quarter, compared to the consensus estimate of $118.18 million. Bandwidth had a positive return on equity of 2.80% and a negative net margin of 5.57%. The company’s quarterly revenue was up 11.5% on a year-over-year basis. During the same quarter last year, the company earned $0.06 EPS. On average, equities analysts expect that Bandwidth will post -0.42 EPS for the current year.

In other news, Director Brian D. Bailey acquired 10,000 shares of the firm’s stock in a transaction that occurred on Tuesday, March 8th. The stock was acquired at an average cost of $27.43 per share, for a total transaction of $274,300.00. The transaction was disclosed in a document filed with the Securities & Exchange Commission, which is accessible through this link. Also, VP Gabriela Gonzalez sold 863 shares of the stock in a transaction dated Tuesday, February 22nd. The stock was sold at an average price of $50.73, for a total value of $43,779.99. The disclosure for this sale can be found here. Insiders purchased 21,135 shares of company stock valued at $616,629 in the last quarter. 11.05% of the stock is currently owned by corporate insiders.

About Bandwidth (Get Rating) 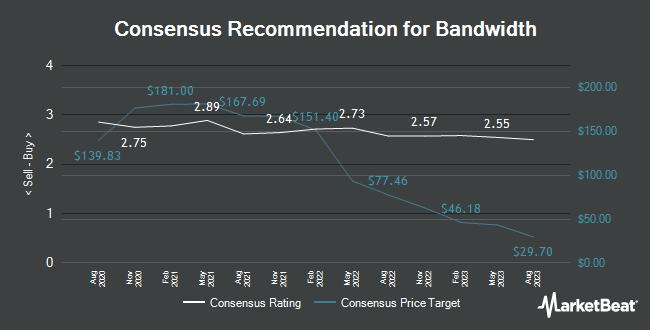 Lantheus Holdings, Inc. Expected to Announce Earnings of $0.70 Per Share