BlueLinx (NYSE:BXC – Get Rating) will post its quarterly earnings results after the market closes on Tuesday, May 3rd. Parties that are interested in registering for the company’s conference call can do so using this link.

BlueLinx (NYSE:BXC – Get Rating) last issued its quarterly earnings results on Tuesday, February 22nd. The construction company reported $7.30 EPS for the quarter. BlueLinx had a net margin of 6.92% and a return on equity of 118.32%. The company had revenue of $972.95 million during the quarter.

Several equities analysts have recently issued reports on the company. StockNews.com started coverage on BlueLinx in a research note on Thursday, March 31st. They issued a “buy” rating for the company. Craig Hallum increased their target price on BlueLinx from $104.00 to $115.00 in a report on Thursday, February 24th. Finally, Benchmark lifted their price target on BlueLinx from $110.00 to $125.00 and gave the stock a “buy” rating in a report on Thursday, February 24th. Five analysts have rated the stock with a buy rating, According to data from MarketBeat, BlueLinx currently has a consensus rating of “Buy” and a consensus price target of $104.25.

About BlueLinx (Get Rating) 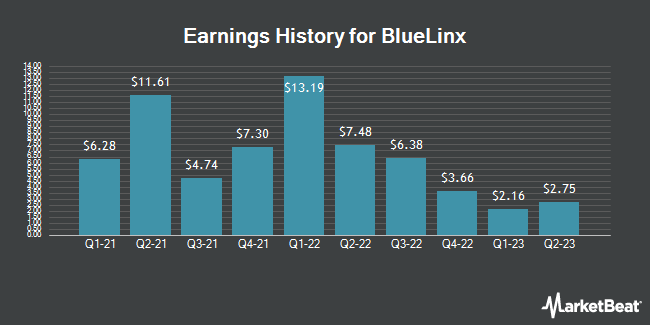 Receive News & Ratings for BlueLinx Daily - Enter your email address below to receive a concise daily summary of the latest news and analysts' ratings for BlueLinx and related companies with MarketBeat.com's FREE daily email newsletter.

Complete the form below to receive the latest headlines and analysts' recommendations for BlueLinx with our free daily email newsletter: