Citizens & Northern Co. (NASDAQ:CZNC – Get Rating) Director Terry L. Lehman purchased 650 shares of the company’s stock in a transaction that occurred on Monday, April 25th. The stock was acquired at an average cost of $24.16 per share, for a total transaction of $15,704.00. Following the transaction, the director now owns 21,660 shares in the company, valued at approximately $523,305.60. The acquisition was disclosed in a legal filing with the Securities & Exchange Commission, which can be accessed through the SEC website.

The business also recently declared a quarterly dividend, which will be paid on Friday, May 13th. Investors of record on Monday, May 2nd will be given a dividend of $0.28 per share. This represents a $1.12 annualized dividend and a yield of 4.63%. This is a positive change from Citizens & Northern’s previous quarterly dividend of $0.27. The ex-dividend date is Friday, April 29th. Citizens & Northern’s dividend payout ratio (DPR) is presently 58.33%.

CZNC has been the subject of several research analyst reports. StockNews.com initiated coverage on shares of Citizens & Northern in a research note on Thursday, March 31st. They set a “hold” rating for the company. Zacks Investment Research upgraded shares of Citizens & Northern from a “hold” rating to a “buy” rating and set a $28.00 price target for the company in a research report on Wednesday, March 30th.

About Citizens & Northern (Get Rating) 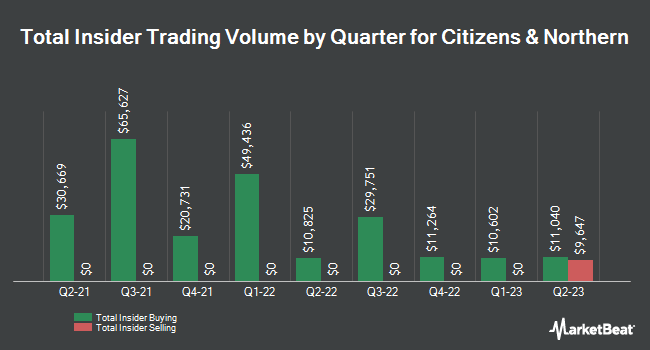 Complete the form below to receive the latest headlines and analysts' recommendations for Citizens & Northern with our free daily email newsletter: