IAMGOLD (NYSE:IAG – Get Rating) (TSE:IMG) is scheduled to be issuing its quarterly earnings data after the market closes on Tuesday, May 3rd. Parties interested in participating in the company’s conference call can do so using this link.

IAMGOLD (NYSE:IAG – Get Rating) (TSE:IMG) last released its earnings results on Wednesday, February 23rd. The mining company reported $0.09 earnings per share (EPS) for the quarter. IAMGOLD had a positive return on equity of 1.07% and a negative net margin of 22.09%. The firm had revenue of $294.60 million for the quarter, compared to analysts’ expectations of $296.07 million. During the same quarter in the previous year, the business posted $0.04 earnings per share. On average, analysts expect IAMGOLD to post $0 EPS for the current fiscal year and $0 EPS for the next fiscal year.

IAMGOLD Corporation, through its subsidiaries, explores, develops, and operates gold mining properties in North America, South America, and West Africa. The company owns interests in the Rosebel mine located in Suriname, South America; the Essakane mine situated in Burkina Faso and Boto gold project located in Senegal, West Africa; and Westwood mine, covers an area of 1,925 hectare and located in Quebec and the CÃ´tÃ© gold project, which covers an area of 586 square kilometer located in Ontario, Canada. 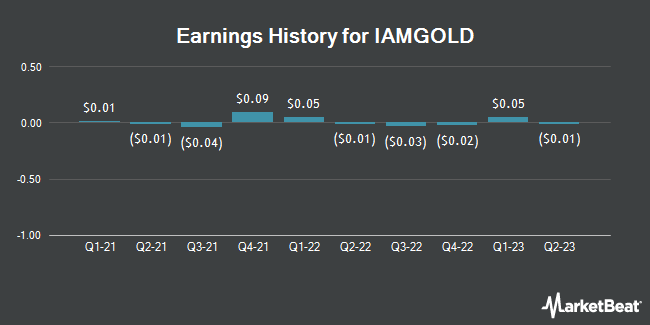