Starbucks (NASDAQ:SBUX – Get Rating) was downgraded by research analysts at TheStreet from a “b-” rating to a “c+” rating in a research note issued on Friday, TheStreetRatingsTable reports.

Starbucks (NASDAQ:SBUX – Get Rating) last posted its earnings results on Tuesday, February 1st. The coffee company reported $0.72 earnings per share for the quarter, missing analysts’ consensus estimates of $0.80 by ($0.08). The business had revenue of $8.05 billion for the quarter, compared to analyst estimates of $7.95 billion. Starbucks had a negative return on equity of 56.17% and a net margin of 14.47%. The firm’s revenue was up 19.3% compared to the same quarter last year. During the same period in the previous year, the firm posted $0.61 earnings per share. As a group, research analysts predict that Starbucks will post 3.28 EPS for the current fiscal year. 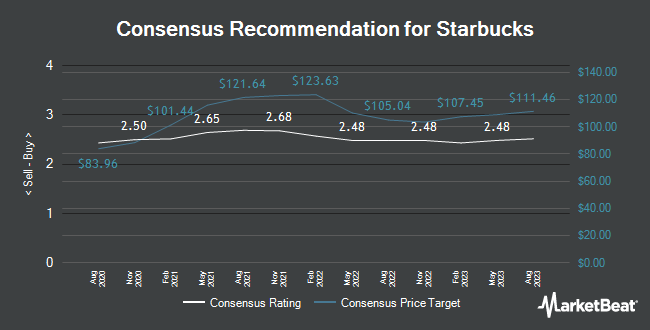