Alnylam Pharmaceuticals (NASDAQ:ALNY – Get Rating) last issued its quarterly earnings results on Thursday, February 10th. The biopharmaceutical company reported ($2.16) earnings per share for the quarter, missing analysts’ consensus estimates of ($1.47) by ($0.69). The business had revenue of $258.10 million for the quarter, compared to analysts’ expectations of $233.62 million. Alnylam Pharmaceuticals had a negative return on equity of 109.21% and a negative net margin of 101.01%. The company’s revenue for the quarter was up 57.8% compared to the same quarter last year. During the same period in the prior year, the company earned ($2.09) EPS.

In related news, Director Steven M. Paul sold 15,000 shares of Alnylam Pharmaceuticals stock in a transaction dated Friday, April 1st. The stock was sold at an average price of $170.69, for a total value of $2,560,350.00. Following the completion of the transaction, the director now directly owns 1,000 shares in the company, valued at $170,690. The transaction was disclosed in a legal filing with the Securities & Exchange Commission, which can be accessed through the SEC website. 2.30% of the stock is currently owned by company insiders. 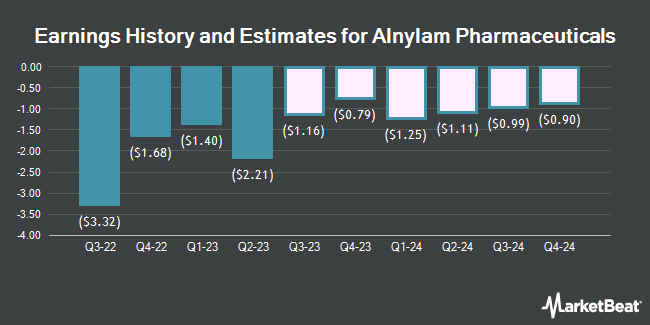 Walmart Price Target Cut to $150.00 by Analysts at Stifel Nicolaus

Complete the form below to receive the latest headlines and analysts' recommendations for Alnylam Pharmaceuticals with our free daily email newsletter: