Casey’s General Stores, Inc. (NASDAQ:CASY – Get Rating) declared a quarterly dividend on Tuesday, March 8th, Zacks reports. Shareholders of record on Monday, May 2nd will be given a dividend of 0.35 per share on Monday, May 16th. This represents a $1.40 dividend on an annualized basis and a dividend yield of 0.68%. The ex-dividend date is Friday, April 29th.

Casey’s General Stores (NASDAQ:CASY – Get Rating) last released its quarterly earnings results on Tuesday, March 8th. The company reported $1.71 earnings per share for the quarter, beating analysts’ consensus estimates of $1.45 by $0.26. Casey’s General Stores had a net margin of 2.71% and a return on equity of 15.56%. The company had revenue of $3.05 billion for the quarter, compared to analyst estimates of $3.05 billion. During the same period last year, the firm earned $1.04 earnings per share. The firm’s revenue was up 51.8% on a year-over-year basis. On average, research analysts forecast that Casey’s General Stores will post 8.84 EPS for the current year.

Casey's General Stores, Inc, together with its subsidiaries, operates convenience stores under the Casey's and Casey's General Store names. Its stores offer a selection of food, including freshly prepared foods, such as pizza, donuts, and sandwiches; tobacco, and nicotine products; health and beauty aids; automotive products; and other nonfood items. 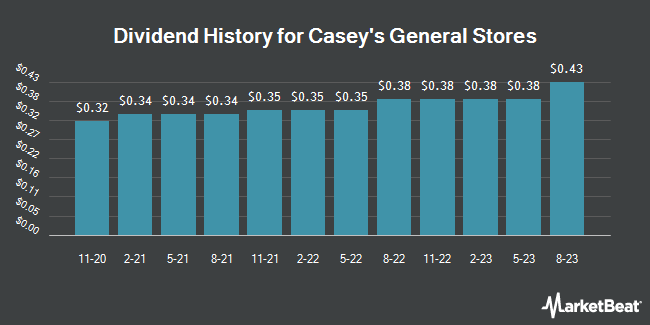 Complete the form below to receive the latest headlines and analysts' recommendations for Casey's General Stores with our free daily email newsletter: