Cumulus Media (NASDAQ:CMLS – Get Rating) will release its earnings data before the market opens on Wednesday, May 4th. Analysts expect Cumulus Media to post earnings of ($0.38) per share for the quarter. Persons that wish to register for the company’s earnings conference call can do so using this link.

Cumulus Media (NASDAQ:CMLS – Get Rating) last announced its quarterly earnings results on Wednesday, February 23rd. The company reported $0.20 EPS for the quarter, missing analysts’ consensus estimates of $0.73 by ($0.53). Cumulus Media had a negative return on equity of 1.63% and a net margin of 1.89%. The company had revenue of $252.30 million during the quarter, compared to the consensus estimate of $253.65 million. During the same quarter in the prior year, the firm earned ($0.01) earnings per share. On average, analysts expect Cumulus Media to post $2 EPS for the current fiscal year and $3 EPS for the next fiscal year.

About Cumulus Media (Get Rating) 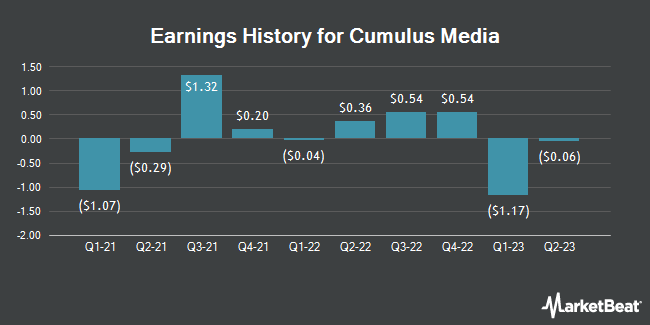 $206.02 Million in Sales Expected for Ribbon Communications Inc. This Quarter

$180.28 Million in Sales Expected for Grab Holdings Limited This Quarter