Seer (NASDAQ:SEER – Get Rating) is set to announce its earnings results after the market closes on Wednesday, May 4th. Analysts expect the company to announce earnings of ($0.41) per share for the quarter. Seer has set its FY 2022 guidance at EPS.Individual that are interested in registering for the company’s earnings conference call can do so using this link.

Seer (NASDAQ:SEER – Get Rating) last announced its quarterly earnings results on Monday, February 28th. The company reported ($0.32) earnings per share for the quarter, beating the Zacks’ consensus estimate of ($0.34) by $0.02. The company had revenue of $3.10 million during the quarter, compared to analyst estimates of $2.23 million. The firm’s revenue for the quarter was up 933.3% compared to the same quarter last year. During the same quarter last year, the business earned ($0.54) EPS. On average, analysts expect Seer to post $-2 EPS for the current fiscal year and $-1 EPS for the next fiscal year.

SEER has been the subject of several research analyst reports. Morgan Stanley dropped their price target on Seer from $23.00 to $21.00 and set an “equal weight” rating for the company in a research note on Tuesday, March 1st. Zacks Investment Research raised shares of Seer from a “sell” rating to a “hold” rating in a research report on Thursday, March 31st.

About Seer (Get Rating)

Seer, Inc, a life sciences company, engages in developing and commercializing products to decode the secrets of the proteome. It develops Proteograph Product Suite, an integrated solution that comprises consumables, an automation instrumentation, and software that allows researchers to conduct proteomic studies in therapeutic and diagnostic research, and clinical trials. 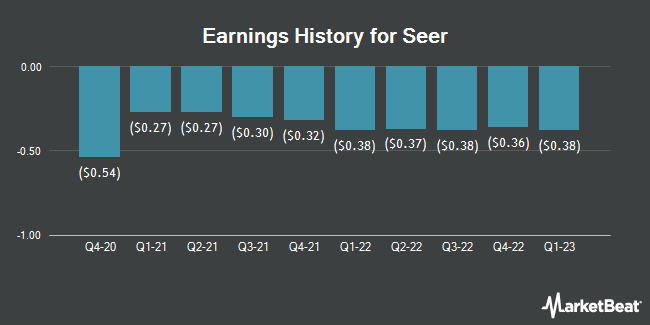 Receive News & Ratings for Seer Daily - Enter your email address below to receive a concise daily summary of the latest news and analysts' ratings for Seer and related companies with MarketBeat.com's FREE daily email newsletter.

Complete the form below to receive the latest headlines and analysts' recommendations for Seer with our free daily email newsletter: