StockNews.com started coverage on shares of DBV Technologies (NASDAQ:DBVT – Get Rating) in a report released on Wednesday. The firm set a “hold” rating on the stock.

DBV Technologies (NASDAQ:DBVT – Get Rating) last issued its quarterly earnings results on Thursday, March 3rd. The company reported ($0.13) earnings per share (EPS) for the quarter, beating the consensus estimate of ($0.32) by $0.19. The firm had revenue of $2.93 million for the quarter, compared to the consensus estimate of $3.97 million. On average, analysts predict that DBV Technologies will post -1.77 earnings per share for the current year.

DBV Technologies SA, a clinical-stage biopharmaceutical company, engages in the research and development of epicutaneous immunotherapy products. Its lead product candidate is Viaskin Peanut, an immunotherapy product, which has completed Phase III clinical trial for the treatment of peanut allergies in 4 to 11 years of age children, adolescents, and adults. 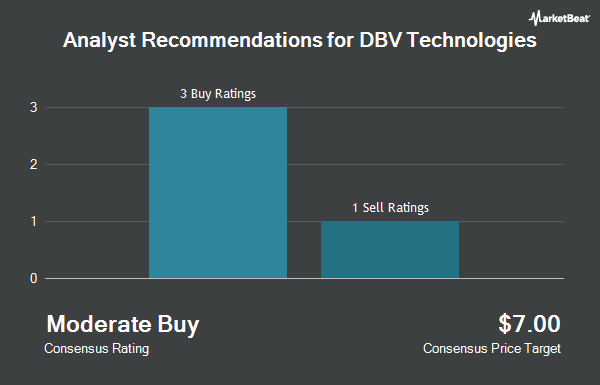 Complete the form below to receive the latest headlines and analysts' recommendations for DBV Technologies with our free daily email newsletter: