Transocean (NYSE:RIG – Get Rating) was downgraded by StockNews.com from a “hold” rating to a “sell” rating in a research report issued to clients and investors on Tuesday.

Transocean (NYSE:RIG – Get Rating) last announced its quarterly earnings results on Tuesday, February 22nd. The offshore drilling services provider reported ($0.19) earnings per share for the quarter, missing the Thomson Reuters’ consensus estimate of ($0.10) by ($0.09). The firm had revenue of $621.00 million for the quarter, compared to the consensus estimate of $658.84 million. Transocean had a negative net margin of 23.16% and a negative return on equity of 4.20%. Transocean’s revenue was down 10.0% on a year-over-year basis. During the same period last year, the business earned ($0.34) EPS. On average, equities analysts expect that Transocean will post -0.6 earnings per share for the current year.

In other news, COO Keelan Adamson sold 349,418 shares of the business’s stock in a transaction on Monday, March 7th. The shares were sold at an average price of $5.00, for a total transaction of $1,747,090.00. The sale was disclosed in a filing with the Securities & Exchange Commission, which is accessible through this hyperlink. Insiders own 12.29% of the company’s stock.

About Transocean (Get Rating)

Transocean Ltd., together with its subsidiaries, provides offshore contract drilling services for oil and gas wells worldwide. It contracts its mobile offshore drilling rigs, related equipment, and work crews to drill oil and gas wells. As of February 14, 2022, the company had partial ownership interests in and operated a fleet of 37 mobile offshore drilling units, including 27 ultra-deep water and 10 harsh environment floaters. 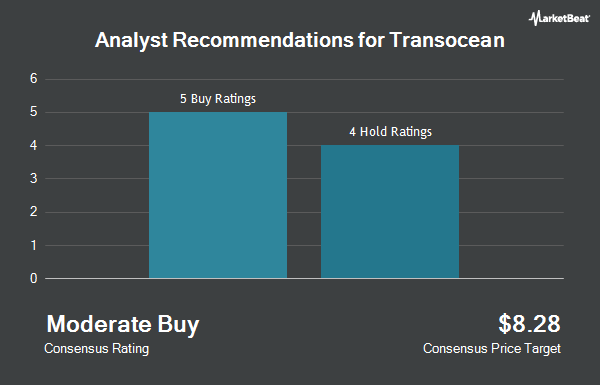 Complete the form below to receive the latest headlines and analysts' recommendations for Transocean with our free daily email newsletter: