ACADIA Pharmaceuticals (NASDAQ:ACAD – Get Rating) last announced its earnings results on Monday, February 28th. The biopharmaceutical company reported ($0.27) EPS for the quarter, missing the consensus estimate of ($0.24) by ($0.03). The firm had revenue of $130.80 million during the quarter, compared to the consensus estimate of $135.44 million. ACADIA Pharmaceuticals had a negative return on equity of 29.79% and a negative net margin of 34.67%. The business’s revenue was up 8.1% compared to the same quarter last year. During the same quarter last year, the business earned ($0.42) EPS.

ACADIA Pharmaceuticals Inc, a biopharmaceutical company, focuses on the development and commercialization of small molecule drugs that address unmet medical needs in central nervous system disorders. The company offers NUPLAZID (pimavanserin) for the treatment of hallucinations and delusions associated with Parkinson's disease psychosis; Trofinetide, a novel synthetic analog for the treatment of Rett syndrome; ACP-044, a novel first-in-class orally administered non-opioid analgesic for treating acute and chronic pain; and ACP-319, a positive allosteric modulator of the muscarinic receptor for treating cognition and schizophrenia. 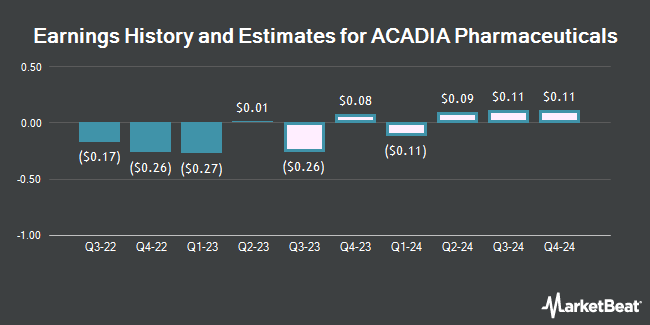 $257.74 Million in Sales Expected for Sotera Health This Quarter