Chuy’s (NASDAQ:CHUY – Get Rating) is set to announce its earnings results after the market closes on Thursday, May 5th. Analysts expect the company to announce earnings of $0.31 per share for the quarter. Investors that are interested in participating in the company’s conference call can do so using this link.

Chuy’s (NASDAQ:CHUY – Get Rating) last issued its earnings results on Thursday, February 17th. The restaurant operator reported $0.40 earnings per share (EPS) for the quarter, beating analysts’ consensus estimates of $0.30 by $0.10. The company had revenue of $98.67 million during the quarter, compared to analyst estimates of $99.58 million. Chuy’s had a net margin of 7.61% and a return on equity of 14.62%. During the same quarter last year, the business posted $0.19 EPS. On average, analysts expect Chuy’s to post $1 EPS for the current fiscal year and $2 EPS for the next fiscal year. 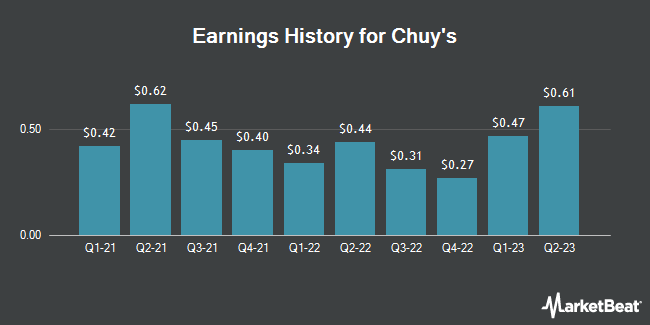 Short Interest in The Gabelli Healthcare & Wellness Trust Expands By 74.3%

2U, Inc. Given Consensus Rating of “Hold” by Brokerages