Getty Realty Corp. (NYSE:GTY – Get Rating) declared a quarterly dividend on Tuesday, April 26th, Zacks reports. Shareholders of record on Thursday, June 23rd will be given a dividend of 0.41 per share by the real estate investment trust on Thursday, July 7th. This represents a $1.64 annualized dividend and a yield of 6.04%. The ex-dividend date of this dividend is Wednesday, June 22nd.

Getty Realty (NYSE:GTY – Get Rating) last released its quarterly earnings results on Wednesday, April 27th. The real estate investment trust reported $0.39 earnings per share for the quarter, beating the consensus estimate of $0.26 by $0.13. Getty Realty had a return on equity of 8.94% and a net margin of 40.45%. During the same quarter in the previous year, the firm posted $0.47 earnings per share. On average, analysts anticipate that Getty Realty will post 1.97 EPS for the current fiscal year.

A number of brokerages have recently commented on GTY. Zacks Investment Research upgraded Getty Realty from a “sell” rating to a “hold” rating in a report on Tuesday, April 5th. StockNews.com began coverage on Getty Realty in a report on Thursday, March 31st. They issued a “hold” rating for the company. Finally, Bank of America cut Getty Realty from a “neutral” rating to an “underperform” rating and dropped their target price for the stock from $34.00 to $31.00 in a report on Thursday, January 20th. One investment analyst has rated the stock with a sell rating, three have issued a hold rating and two have issued a buy rating to the stock. According to MarketBeat, Getty Realty presently has an average rating of “Hold” and an average target price of $33.60. 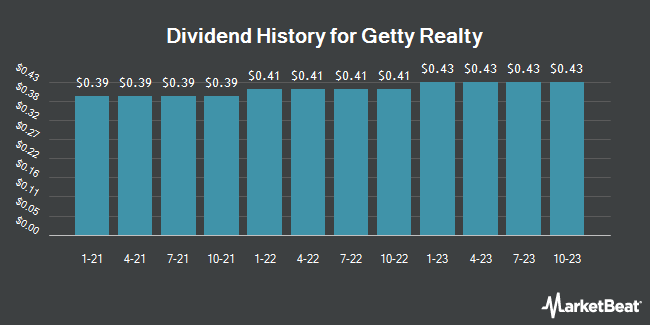 Complete the form below to receive the latest headlines and analysts' recommendations for Getty Realty with our free daily email newsletter: