Harrow Health (NASDAQ:HROW – Get Rating) is scheduled to issue its quarterly earnings data after the market closes on Thursday, May 5th. Analysts expect the company to announce earnings of ($0.04) per share for the quarter. Parties interested in registering for the company’s conference call can do so using this link.

Harrow Health (NASDAQ:HROW – Get Rating) last issued its quarterly earnings results on Thursday, March 10th. The company reported ($0.01) EPS for the quarter, missing analysts’ consensus estimates of $0.08 by ($0.09). Harrow Health had a positive return on equity of 4.36% and a negative net margin of 24.84%. The company had revenue of $20.19 million during the quarter, compared to the consensus estimate of $21.35 million. During the same period in the prior year, the firm earned $0.07 earnings per share. On average, analysts expect Harrow Health to post $0 EPS for the current fiscal year and $0 EPS for the next fiscal year.

In other news, major shareholder Opaleye Management Inc. acquired 28,557 shares of the firm’s stock in a transaction that occurred on Tuesday, April 12th. The stock was bought at an average cost of $6.75 per share, for a total transaction of $192,759.75. Following the acquisition, the insider now directly owns 3,165,000 shares in the company, valued at $21,363,750. The acquisition was disclosed in a document filed with the Securities & Exchange Commission, which is available at this link. Insiders own 12.43% of the company’s stock.

About Harrow Health (Get Rating) 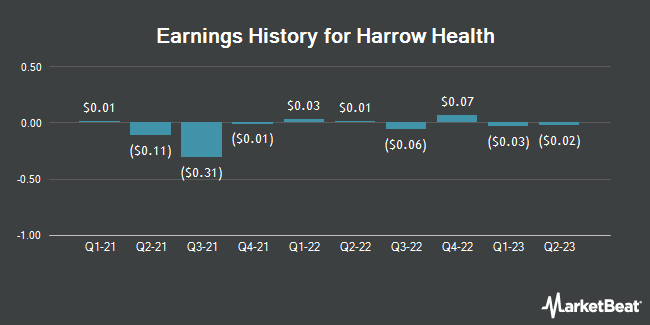 $552.78 Million in Sales Expected for The New York Times Company This Quarter

Cardiovascular Systems, Inc. Expected to Announce Earnings of -$0.22 Per Share

$49.29 Million in Sales Expected for Catalyst Pharmaceuticals, Inc. This Quarter

Complete the form below to receive the latest headlines and analysts' recommendations for Harrow Health with our free daily email newsletter: