Ingredion (NYSE:INGR – Get Rating) is scheduled to release its earnings data before the market opens on Thursday, May 5th. Ingredion has set its FY22 guidance at $6.85-$7.45 EPS.Persons that wish to listen to the company’s earnings conference call can do so using this link.

Ingredion (NYSE:INGR – Get Rating) last issued its earnings results on Thursday, February 3rd. The company reported $1.09 earnings per share for the quarter. Ingredion had a return on equity of 15.42% and a net margin of 1.70%. The business had revenue of $1.76 billion during the quarter, compared to the consensus estimate of $1.72 billion. During the same period in the previous year, the company posted $1.75 earnings per share. The firm’s revenue for the quarter was up 10.2% on a year-over-year basis. On average, analysts expect Ingredion to post $7 EPS for the current fiscal year and $8 EPS for the next fiscal year.

The company also recently disclosed a quarterly dividend, which was paid on Tuesday, April 26th. Shareholders of record on Friday, April 1st were paid a $0.65 dividend. The ex-dividend date of this dividend was Thursday, March 31st. This represents a $2.60 dividend on an annualized basis and a yield of 3.03%. Ingredion’s dividend payout ratio (DPR) is presently 152.94%.

In related news, SVP David Eric Seip bought 5,000 shares of the business’s stock in a transaction that occurred on Friday, February 4th. The shares were bought at an average price of $85.90 per share, with a total value of $429,500.00. The transaction was disclosed in a legal filing with the Securities & Exchange Commission, which can be accessed through this hyperlink. In the last ninety days, insiders have sold 2 shares of company stock worth $170. 1.40% of the stock is owned by insiders. 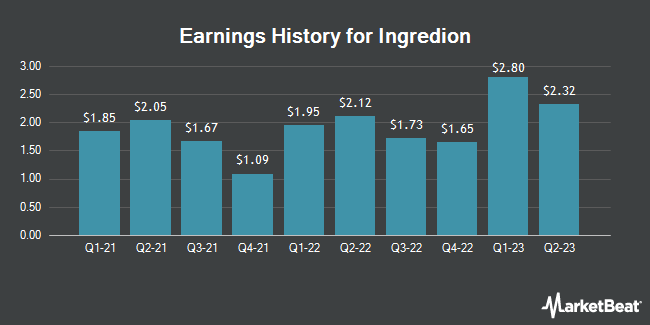 Complete the form below to receive the latest headlines and analysts' recommendations for Ingredion with our free daily email newsletter: