Intuitive Surgical, Inc. (NASDAQ:ISRG – Get Rating) EVP Myriam Curet sold 6,000 shares of Intuitive Surgical stock in a transaction that occurred on Tuesday, April 26th. The shares were sold at an average price of $252.51, for a total transaction of $1,515,060.00. Following the completion of the transaction, the executive vice president now owns 361 shares of the company’s stock, valued at approximately $91,156.11. The transaction was disclosed in a legal filing with the Securities & Exchange Commission, which is available at this hyperlink.

Intuitive Surgical (NASDAQ:ISRG – Get Rating) last announced its quarterly earnings results on Thursday, April 21st. The medical equipment provider reported $1.13 earnings per share (EPS) for the quarter, beating the consensus estimate of $1.08 by $0.05. Intuitive Surgical had a net margin of 27.84% and a return on equity of 14.38%. The company had revenue of $1.49 billion during the quarter, compared to analyst estimates of $1.43 billion. During the same quarter in the previous year, the business earned $1.17 EPS. The firm’s revenue was up 15.1% on a year-over-year basis. Sell-side analysts predict that Intuitive Surgical, Inc. will post 4.12 earnings per share for the current year.

Intuitive Surgical, Inc develops, manufactures, and markets products that enable physicians and healthcare providers to enhance the quality of and access to minimally invasive care in the United States and internationally. The company offers the da Vinci Surgical System to enable complex surgery using a minimally invasive approach; and Ion endoluminal system, which extends its commercial offerings beyond surgery into diagnostic procedures enabling minimally invasive biopsies in the lung. 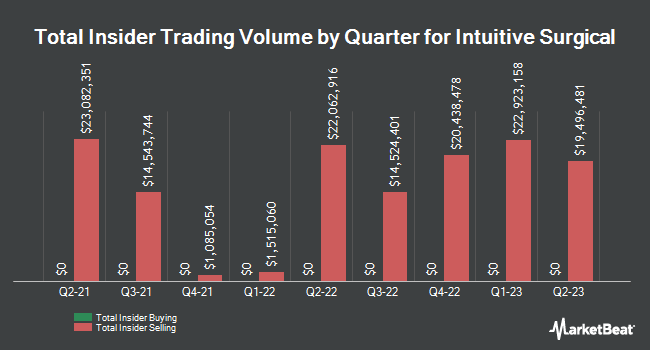 Complete the form below to receive the latest headlines and analysts' recommendations for Intuitive Surgical with our free daily email newsletter: